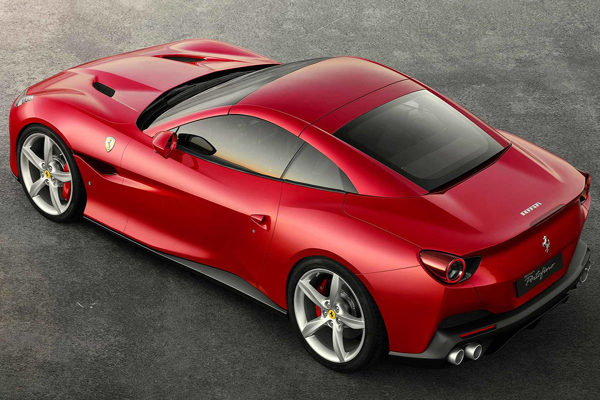 Portofino is Ferrari’s new “base” model that comes to California T. The change of model has been awaited for quite some time since California debuted in 2008, and in 2014 the turbo version California T. The Italians are giving up completely from the name California and instead of it appears the model, named after the beautiful little town in northwestern Italy.

Portofino is more than California’s facelift version, although its design can be described as an evolution of the previous model. More important, however, is that the model is built on a completely new and much lighter chassis, which has led to a significant improvement in body strength.

The 3,9-liter V8 engine with two turbines is in the next phase of its development and its power has increased by 40 horsepower – to an impressive 600 at 7500 rpm. At maximum torque the increase is modest – 5 Nm to 760 Nm at 3000 rpm. Ferrari has not yet reported how much weight the new car is, but the Portofino acceleration from 0 to 100 km/h takes 3.5 seconds, or 0.1 seconds faster than California T. Its maximum speed is 320 km/h, with about 5 km/h higher than the previous model.

Portofino comes out on the market with a new servo on the wheel and Ferrari’s third-generation electronic rear differential, and these changes ensure better grip and better control of the car. The interior features a new steering wheel design, a 10.2-inch touchscreen touchscreen, a new and more efficient air-conditioning and electrically-operated seats and 18 adjustable options.