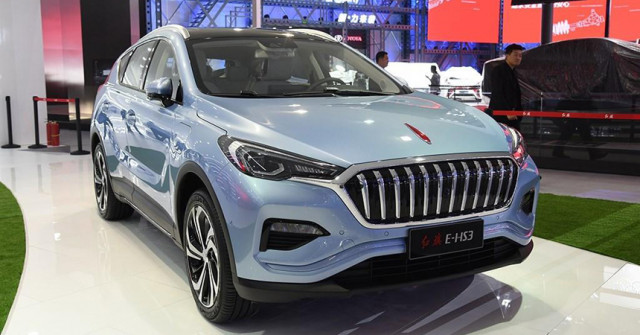 Two years ago, Chinese state-owned automotive manufacturing company FAW began transforming the brand Hongqi, which produced limousines for the country’s government. In the end, it has become a premium brand for rich Chinese consumers and has already released several models on the market. The brand continues its development and has already begun to produce electric vehicles.

The first is the crossover Hongqi E-HS3, which was introduced in the spring, and is now on the conveyor. It is not an electrical version of an existing machine, but a stand-alone model. And is the most compact car in the history of the Hongqi brand. Its length is 4490 mm, the width is 1874 mm and the height is 1613 mm, which in fact repeats VW Tiguan. However, the German crossover has a higher wheelbase – 2750 mm versus 2677 mm for the Chinese.

The design of the electric car is in the style of standard gasoline models of the Hongqi brand. The batteries are placed under the floor, and the rear suspension is independent. The electric motor is only on the front axle, and its features are not particularly impressive – 155 hp and 340 Nm of torque. The maximum speed is 160 km/h. The battery is also modest – 54 kW/h, which gives mileage of 390 km by documents, but the crossover actually goes no more than 250 km.

The electric car offers a leather saloon and electrically heated front seats. There are three screens – one for the utensils and two for the information and entertainment system. The equipment also includes an air conditioner and a glass roof, and the model is expected soon to receive an autopilot developed jointly with another Chinese company – Baidu.