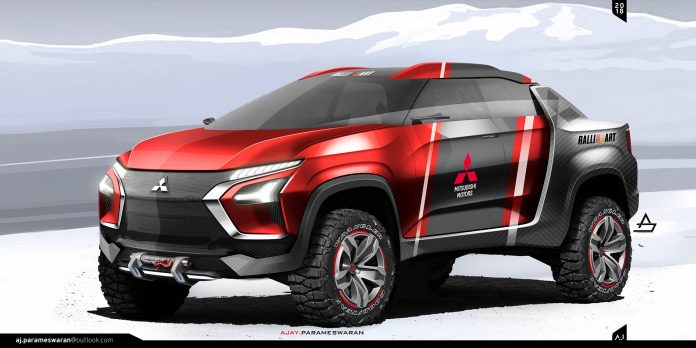 The pickups can be quite controversial. Although they are extremely popular in places like North America and Australia, buyers in Europe and Asia are not much enthusiastic about having such a machine.

And yet, despite what we have said, we must pay tribute to the creation of the Mitsubishi Ute, skillfully engineered by Ajay Parameswaran.

This so-called New Age Ute from Mitsubishi can compete with the best pickups, whether in the city or offroad. In terms of size, it is characterized as medium-sized, with a very clear design that the future Mitsubishi Triton will have.

Although the designer does not specify anything about the drive mechanism, the fact that it has an exhaust system suggest for using a combustion engine. Maybe the engineers will implement a hybrid system, using diesel or gasoline engine.

While the interior design is modern but not as futuristic as the exterior, the steering wheel seems to be outdated. This is the same steering wheel you will get at the Mitsubishi Triton / L200. Still, we see a better idea of ​​the preliminary sketches.

The cabin looks solid and practical, with plenty of storage for items on the doors, console and dashboard.

Considering this, we are actually looking at an impressive pickup, both inside and outside. Even creating this model would be a useful move for Mitsubishi.