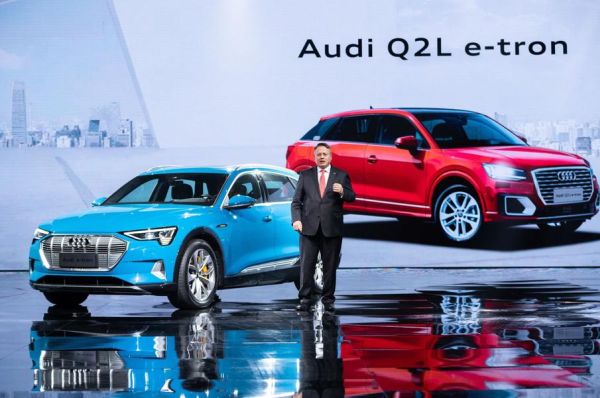 Audi celebrated the 30th anniversary of its partnership with the Chinese manufacturer First Automotive Works (FAW) with a first official photo of the new electric crossover Q2 L e-tron. This is also the first model of the German branded current for the Chinese market and its sales will start next year.

Interestingly, the larger electric crossover Audi e-tron, the premiere of which was this Autumn, will only appear in China in 2020.

However, the official details of the compact SUV model Q2 L e- tron missing. It is unofficially claimed that the base of the electric car is the MQB platform, with the model’s mileage being about 500 km. The design of the crossover is completely traditional to appeal to local buyers. In general, it largely repeats that of e-tron.

The future Audi Q2 L e-tron is part of Audi’s strategy to “locate” the different models, taking into account the specific requirements of Chinese customers. A major role in this case also plays the supply of special digital repairers. The company became the first manufacturer to offer in China specially developed 3D maps and a system for recognizing hieroglyphs.

The first electric car of the Audi – the crossover e-tron, was shown in September. The machine has two asynchronous electric motors with a total output of 360 hp. and 561 Nm of torque. The capacity of the batteries is 95 kW/h, which provides a mileage of one 500 km charge according to the new WLTP measurement cycle.