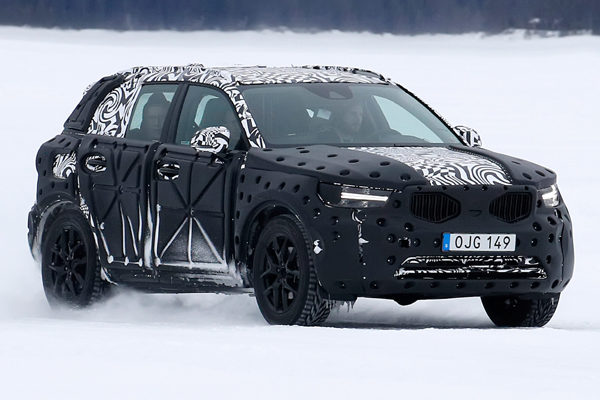 The new Volvo XC40’s compact crossover is expected to be of great interest, as it will mark the entry of the Swedish brand in smaller SUVs and launch a new phase of the model offensive of the company.

British Auto magazine publishes new spy photos from the XC40 tests, giving these images the best idea of ​​what we can expect from the model. Naturally, the camouflage hides the features of the car, but the company has already suggested that the XC40 will be more free and cheerful in design than the cool, smooth and minimalist lines that feature the new large XC60 and XC90 models.

For the moment, it looks like the headlamps and radiator grille are directly taken from the conceptual 40.1 and 40.2, which debuted in May last year. Together with the XC40 will debut the new S40 and V40, which also have to demonstrate the new design language of the brand in terms of compact models.

The XC40, as well as the other two new models in the 40 series, will be built on the new modular platform CMA, which is specially designed for compact models. In terms of propulsion, the XC40 will receive a new 1.5-liter 3-cylinder turbocharged gasoline engine that will be available with a 4-cylinder diesel with the same or similar capacity.

And Volvo has already confirmed that they are considering the possibility of using the hybrid drive for the new members of the model family 40. The XC40 premiere may be already in April at the Shanghai exhibition and sales start in 2018.