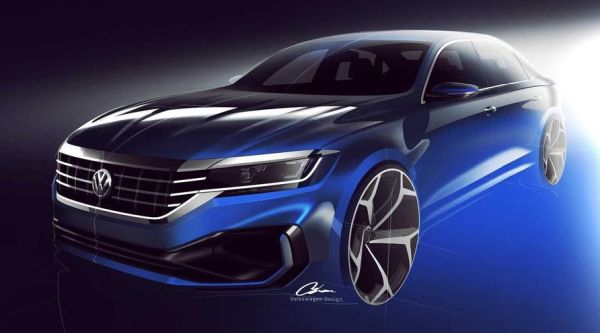 Volkswagen showed the first sketches of the new generation of its Passat sedan, which will be available in the US market early next year. The premiere of the model is scheduled for the Detroit Motor Show in January.

The sedan has learned an aggressive look but remains easily recognizable. Part of the design elements are in the style of the new Jetta and Arteon, but the bodywork is entirely new. In common with the previous generation of the model is only the roof. Thus, the Passat will meet the brand’s new corporate style with a radiator grille with horizontal ribs, more expressive headlamps and narrow rear lights.

The technical model will be a bit different from the current generation. The VW Passat retains its PQ46 platform and engine – a 2.0-liter turbocharger with 176 hp and 250 Nm. Because of the failure to pass the MQB architecture, the model will not get a hybrid version. Volkswagen has already given up on the existing 3.6-liter VR6 engine and 283 hp.

Saving money for the new platform is due to the decline in interest in sedans, but Volkswagen believes that this class of cars still has a future. The new Passat will not have an instrument panel, but it will receive an LED deco, automatic stop system, multimedia with an 8-inch display and adaptive cruise control.