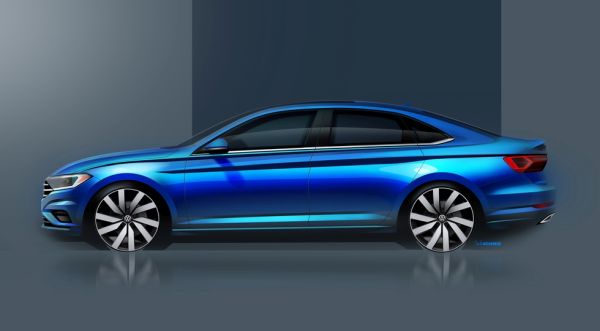 Only 24 hours after showing the first official image of the new generation of its Jetta sedan, Volkswagen revealed the rest of its design. It is already clear and what will be the interior of the new model.

The next generation of Jetta will be officially presented at the Detroit Motor Show in January. The appearance of the sedan follows the brand’s new company style, which is based on more sharp lines. The radiator grille is the same as the VW Arteon flagship, and the rear lights are based on the VW Virtus (this is Polo in a sedan version to be available in South America).

The car’s saloon is completely new. Jetta’s top releases will teach a digital instrument panel that is visually integrated with the large touchscreen of the multimedia system. Such a solution was also used in the latest generation of the VW Polo.

The new Jetta is built on the MQB platform. According to preliminary data, the US version will rely on a 1.4 TSI petrol engine with a power of 150 hp. The engine will work in conjunction with a 6-speed manual transmission or a 8-speed automatic.

Sales in the US will start in the second half of 2018. Prices, and when the model will appear on other markets, are not reported yet.