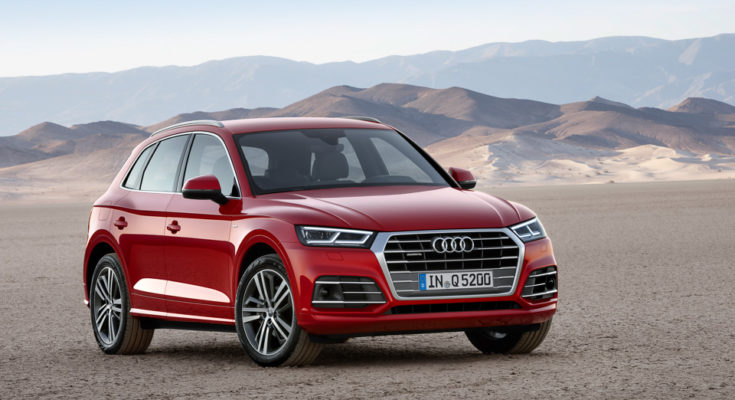 Audi has officially introduced the second generation of its Q5 crossover. The model debuted at the Paris Motor Show and its sales will start in early 2017. It is already known that a SUV in Europe will be offered at a starting price of 45,100 euros.

The competitor of the BMW X3 and Mercedes-Benz GLC is built on the modular MLB platform used in the new generation of Audi A4 and Q7. Thanks to it, the car has lost 90 kg. compared to its predecessor. The length of Q5 is 4660 mm, the width is 1890 mm and the height is 1660 mm. The distance between the two axles is 2820 mm. The volume of the trunk is 550 liters, which can be increased to 610 liters if the rear seats are moved as far as possible. When the seats are down, the volume reaches 1550 liters.

The engines at the crossover can be combined with both 6-speed manual gearbox and 7-speed robotic S-transmision. The only exception is the most powerful diesel engine that has an 8-speed automatic. The model has received the new quattro ultra system, where the asymmetric Torsen differential has been replaced by a multi-disc coupling. For the 150 hp version. the four-wheel drive system is an option.

Modification with the most powerful diesel retains the old Torsen system, offering a sporty rear differential. The car will also be available with suspension with springs and shock absorbers, the hardness of which can be changed using the drive select system. The customer will also be able to order pneumatic suspension with 5 choice of ground clearance.