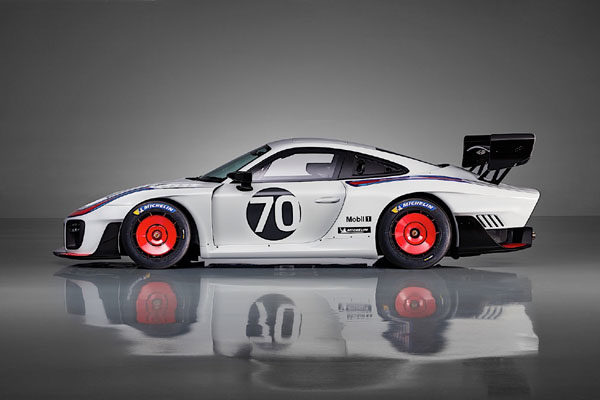 In the late 1970s, the Porsche 935/78 won the name Moby Dick in the 24 Hours of Le Mans, largely due to the elongated silhouette, the huge aerodynamic elements and the sparkling white paint. There really is a resemblance to the white whale of Herman Melville’s legendary novel. Now Porsche revives 935, 40 years later and with a power of 700 horsepower, with the production series of the track car will be only 77 pieces. And in the creation of the “new” 935 are used the maximum amount of elements, reminiscent of other successful machines of the brand.

Rims are the same as those of the original 935/78, the rear LED lights on the massive spoiler come directly from the LMP1 prototype 919 Hybrid, the side mirrors are a reference to 911 RSR and last but not least – the titanium exhaust mufflers are like those of 908 1968.

The interior of the interior also has interesting references – the wooden end of the gear lever takes us back to the 917, 909 Bergspyder and Carrera GT, and the carbon wheel and the display behind it are occupied by the 911 GT3 R for the model year 2019.

Modern Moby Dick is powered by a 3.8-liter 6-cylinder engine with two turbines – the same as the 911 GT2 RS, which has homologation for operation on public roads. The brakes are also impressive – 6-piston aluminum brakes and 380-mm cut steel brake discs with internal cooling.

The bad news – the price of 701,948 EUR excluding VAT, with the delivery of the car ready to go on the track starting in June next year.