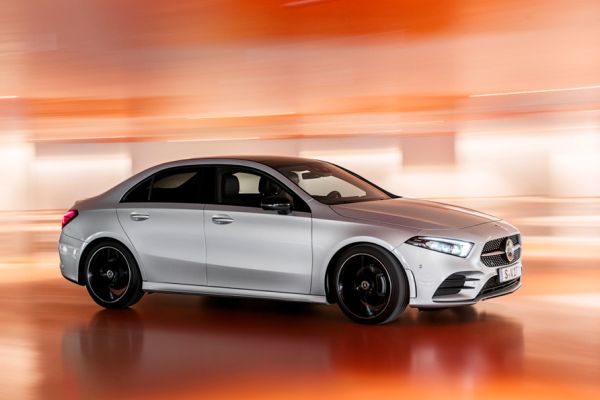 Already in April this year, Mercedes-Benz introduced the A-Class sedan, but this was the extended version, which will be available only on the Chinese market. Now the German manufacturer is also ready with a standard 4-door model that will be sold around the world and will be the most affordable in the family.

The new sedan will not replace the coupe Mercedes CLA, which will continue to be available, and will simply fill the model range. The idea of ​​the German manufacturer is to have a car to compete with the Audi A3 Sedan. The company does not count the BMW 1-Series sedan as a rival, as it is only available in China and Mexico.

The company has officially announced before the vehicle came that it will have the best drag coefficient for the standard models – 0.22. In hatchback A-Class, this indicator is 0.25, and at CLA – 0.23.

The interior of the sedan is identical to that of the hatchback and is styled in the style of the E-Class and S-Class bikers. There are two displays in front of the driver, one replacing traditional utensils, and the other one responsible for the MBUX multimedia system. In the basic version, the screens are diagonally 7 inches, with the average versions it is 10.25 inches only for multimedia and the highest levels of equipment and the two screens are 10.25-inch.

At the start of the sale, the sedan will be offered two modifications – Mercedes A 180 d with 1.5-liter turbo diesel (116 hp) and Mercedes A 200 with a 1.3-liter gasoline turbocharger with 163 hp. Both engines work in combination with Getrag’s 7-G DCT robotic transmission. In the first place, only front-end cars and semi-independent rear suspension will be available. Then versions with rear multi-point rear suspension and four-wheel drive will come out.

The premiere of the Mercedes-Benz A-Class sedan will be held in Paris in October. Production in Mexico started at the end of the year and in Germany in the first quarter of 2019.