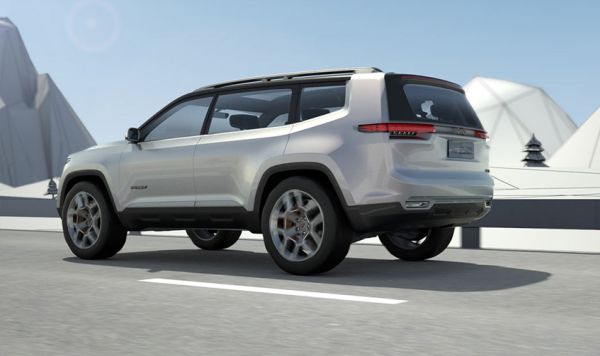 The Jeep company used the Shanghai car showroom to show a prototype of a SUV named Yuntu. The machine is a precursor to a great model that will become the flagship brand for the Chinese market. In Europe, the car is likely to be sold under a different name, as long as it is judged to be successful on this continent.

The SUV has received the 7-section radiator grille, LED headlamps and large aluminum wheels. The prototype does not have a central pillar, and the doors open in the direction of movement to make it easier for passengers to enter the lounge.

There are 6 separate seats in the saloon, but it is known that the model will have 7 and will be built on the 2 + 3 + 2 seats. The big crossover is equipped with a hybrid power unit, whose characteristics are still kept secret. Two gasoline modifications will be available – a 2.0-liter 4-cylinder engine and 3.0-liter V6.

According to preliminary data, the standard SUV will appear in 2018 and will have to compete with Volkswagen Teramont, Ford Edge and Toyota Highlander. Production for China will take place in Gangzhou. Most likely the model will be reborn Commander name, under which Jeep was selling a large SUV in 2005-2010.