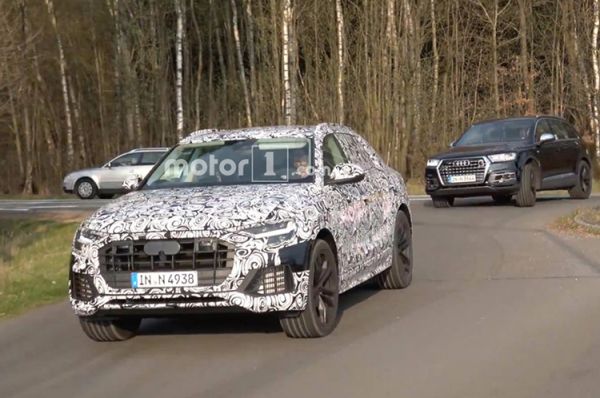 Video recording of the future Audi Q8 crossover on the Nurburgring track was published by Motor1.
According to the release, the Serie version of the model will be available on the market next year and will be produced at the brand’s Bratislava plant (SLVC). The new Audi Q8 will compete with the BMW X6 and the Mercedes-Benz GLE Coupe, with the price going over EUR 100,000.

The design of the crossover almost entirely repeats that of the concept of the same name shown at the Detroit Motor Show in January. It is unofficially claimed that the Q8 will receive gasoline and diesel V6 and V8 engines. On the market, the most powerful version will be the SQ, which will rely on the 4.0-liter V8 diesel with 430 hp.

It is also expected to release RS Q8, which has a V8 engine of about 600 hp. There will probably be an all-electric version of the E-Tron.

As for the Detroit concept, it was powered by a hybrid power unit that includes a 3.0-liter gasoline V6 and an electric motor with a total power of 470 hp. Audi claims that the standard Q8 Sport Concept accelerates from 0-100 km/h in 4.7 seconds to 100 km/h and develops a top speed of 275 km/h.