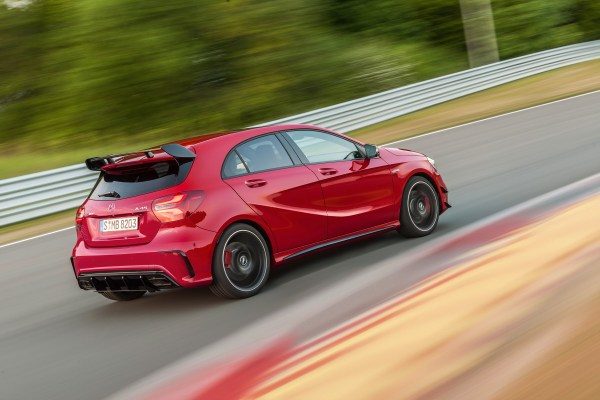 Manufacturers of sporty models are faced with an interesting dilemma – on the one hand, they have to reduce the level of harmful emissions that emit their cars and on the other hand, customers continue to expect more powerful vehicles. The next generation of the Mercedes AMG A45 clearly shows the direction chosen by the company, especially after it became clear that the car will receive a power of at least 400 horsepower.

“We do not want to suggest or give information to our rivals, but we have to offer a model with a power of more than 300 kilowatts (402 horsepower) – this is the new standard”, said Mercedes-AMG chief Tobias Moers on the next AMG A45, quoted by Carscoops. “It is very likely we will use an electrically driven turbocharger along with a 2-liter 4-cylinder engine to handle this task”, added he.

AMG already uses such a solution, but for the 3-liter 6-cylinder engines, Moers has made it clear that the new A45 will seek evolution of this formula. The rumors that the next generation A45 will have a power of more than 400 horsepower are not from yesterday. Two years ago, Moers promised that the new A45 would be the most powerful in its segment.

Later, it became clear that Mercedes-AMG engineers are planning to use a 9-speed dual-clutch automatic in the car that, if operated with a power output of over 400 horsepower, will provide the A45 acceleration from 0 to 100 km / h in less than 4 seconds.

With this data, the A45 will be a direct rival of the Audi RS3, powered by a 2.5-liter 5-cylinder turbocharged engine with a power of 400 horsepower and a maximum torque of 480 Nm.