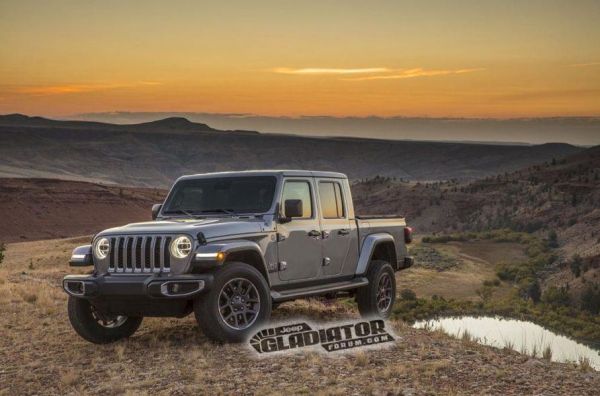 Jeep presented official photos of its new pickup, which will be named Gladiator. The machine is built on the platform of Wrangler SUV, offering the best-in-class lifting capacity and towing capability, as well as a crossover stability stabilizer unit unique to the mid-size pickup system.

According to information from participants of JeepGladiatorForum, the pickup will be available with two versions in a four-wheel drive system. The first one is the Rock-Trac with a split-box and differentials Tru-Lok with electronic blocking on both bridges, the second is Command-Trac, which locks the front axle and has different gear ratios of the lowering gears.

The Gladiator will be equipped with reinforced Dana 44 new-generation and 33-inch tire. The machine will be able to tow a tow with a mass of 3470 kg and its lifting capacity will be 725 kg. The model will be available in several versions with a soft or hard roof, and the suspension will be set to a larger caliber when driving on standard roads.

The engine’s range will include a 3.6-liter V6 Penastar with a “start-stop” system and a 3.0-liter 6-cylinder diesel. Both units are combined with an 8-speed automatic gearbox and a six-speed manual engine is also available for the petrol engine. The Uconnect multimedia system and the front-mounted heavy-duty camcorder (Rubicon only) will also come in the pickup equipment.

Under the name Gladiator, the Jeep company offered large size pickups during the 1962-1988 era built on the Wagoneer platform. The model is based on the first US Army truck built after the Second World War.