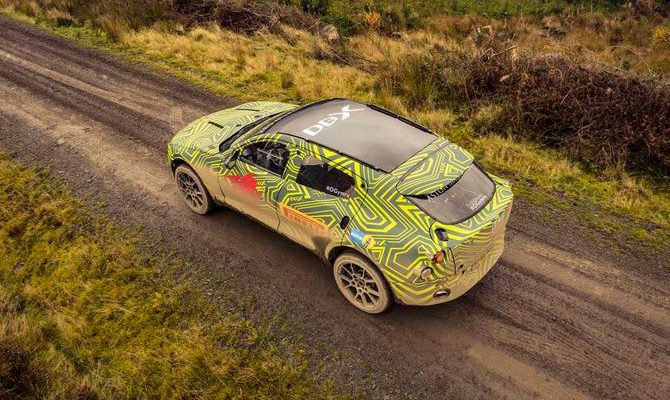 Aston Martin’s renaissance under the direction of Andy Palmer continues with full force. The company developed the models DB11, V8 Vantage, DBS Superleggera and Lagonda Taraf. The next step is a sports crossover.

The name of the first crossover of the brand will be Aston Martin DBX. The serial car will be very different from the prototype, which was just a “raised” coupe with two doors. On the production line is a five-spindle with a more traditional design.

The British manufacturer has released photos and videos from the new model test. Aston Martin DBX is covered with camouflage, so the details can not be considered. However, the silhouette and other details can be noticed. Like the solid glass roof. Or like the headlamps borrowed from the V8 Vantage.

However, this is temporary and the serial crossover optics will be completely different. Therefore, the shape of the bumpers will most likely also change, so the serial car does not need to get the same grille as the prototype.

Aston Martin DBX will be assembled in the new plant in Wales, where the first electric car in the history of the brand will soon begin production. The company will equip the sports crossover with V12 turbo engine with its own development and the Mercedes-Benz V8. In the future, the German company will share with the British a hybrid system.

The Aston Martin first crossover platform will later be powered by an electric sedan and a SUV under the Lagonda brand. Production of DBX should begin at the end of 2019. The company relies on the crossover to cause great interest among women. The main competitors of the model will be Lamborghini Urus and Ferrari Purosangue.