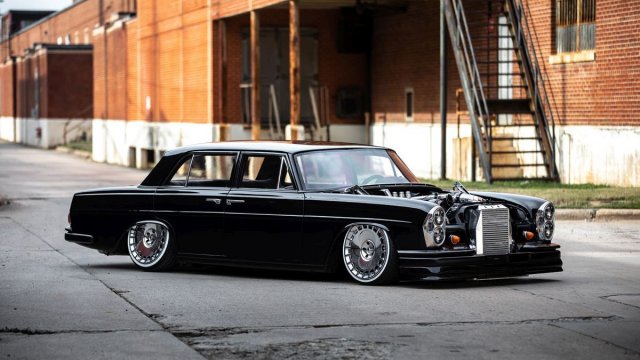 There are workshops that impress with the Mercedes S-Class tuning, but there are a lot of “brighter” developments. For example, the American studio Eurowise has turned an old model into a foolish and low-end hot-rod.

The Mercedes-Benz 280 S W108 from 1969 was taken as the basis for this “creation”. The Eurowise masters not only reduced the clearance of the car but also lowered and covered it. The most original part, however, is the opening of the rear doors against the direction of movement.

The materials used in the salon are leather, suede and carbon. The three-beam steering wheel is borrowed from the modern Mercedes C63 AMG. In addition, a central locking system, electric windows, a powerful audio system and Bluetooth came up.

The standard 2.8-litre V6 engine did not provide the desired dynamics, so under the hood was a 5.3-litre V8 engine from Chevrolet, complemented by the huge Borg Warner S366 turbine. The tuning uses also 6-speed Tremec T56 manual transmission, such as the Corvette and Mustang.

The tuned Mercedes-Benz 280 S W108 received an air suspension and it is now a leeward capable of hopping. Brembo brakes with a diameter of 380 mm and 18-inch castor wheels are fitted.