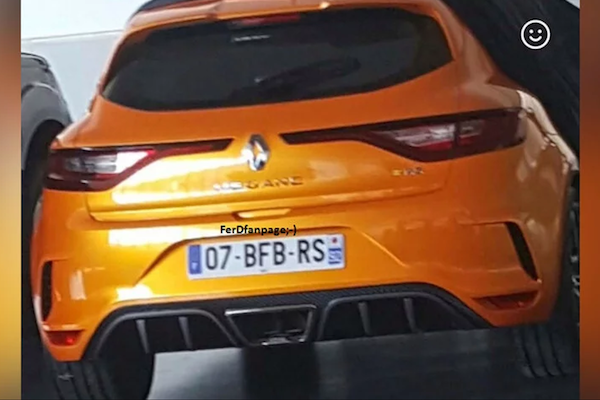 Recent months we have seen many spy photos of the new Renault Megane RS. Each of them, however, was noticed by a machine-masked engineer who barely revealed any of his design. The cabinets were either covered with camouflage film and masking elements or were not equipped with the full optical package that fit each RS.

We now have the opportunity to look at at least part of the look of the new hotheads, thanks to a photo on the rear and a few unofficially framed frames from Renault’s factory.

On the first photo you can see the back of a bright orange car that looks ready for the dealer network. The frame features muscular fenders and an aggressive diffuser, the central part of which has a trapezoidal end of the exhaust system with two large tubes in it. The refurbished bumper also has a pair of holes for removing hot air from the rear brakes, and the lid is seen on the Renault Sport logo.

The designers continued with modifications to the rear spoiler, which now has a recess in the middle, just above the third stop light. The two sides of the spoiler are painted in the color of the body, unlike the Megane GT, which is covered with black lacquer. Changes in appearance are complemented by new aluminum black wheels and wider high-speed tires.

As it was clear before, the new Megane RS will debut on May 26th during the Monaco Grand Prix in Formula One.

Recently there have been rumors that the new Megane RS will have four wheel drive, but according to the latest information, the model will continue to be driven only by its front axle. As for the engine, the options are two. Renault will use either the 1.8-liter turbocharged engine from the Alpine A110 concept, or they will rely on an all-new development with 2.0-liter workload and turbocharging. No matter what engine the engineers will stop, the power will reach about 300 hp. and will drive the front axle with a 6-speed manual transmission or a 7-speed dual clutch automatic.

The four-wheel steering system from the Megane GT will also be available here, but unlike the weaker model where it is standard and obligatory, customers will be able to choose whether they want their car to be equipped with it or not.