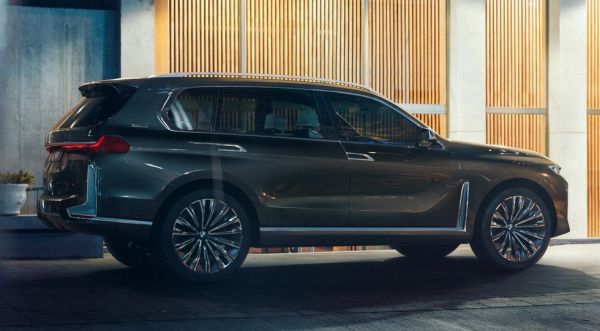 The premiere of the concept version of the BMW X7 new flagship flagship will take place tomorrow, September 8, but pictures of the SUV appeared on the internet. They were published by Bimmerpost.

The seventh prototype, which will be shown for the first time at an Audi in Frankfurt, has received huge “nostrils”, large tires and narrow front and rear lights. It is very likely, however, that the serial version of the SUV will be changed, especially since the Bimmerpost forum fans have furiously criticized the appearance of the machine.

Vehicle information is missing, but it is claimed that the concept prototype will receive the hybrid power unit on which the sedan BMW 740e iPerformance relies. It includes a 4-cylinder gasoline engine and an electric motor with a total output of 326 hp, with a combined fuel consumption of 2.1 l / 100 km.

As for the standard SUV, it is expected to be equipped with a 3.0-liter gasoline V6 developing 340 hp as well as a 4.4-liter gasoline V8 with 445 hp. There will also be diesel modifications.

The launch of the new Bavarian flagship market is planned for 2018. Major competitors of the BMW X7 will be Mercedes-Benz GLS and Range Rover.