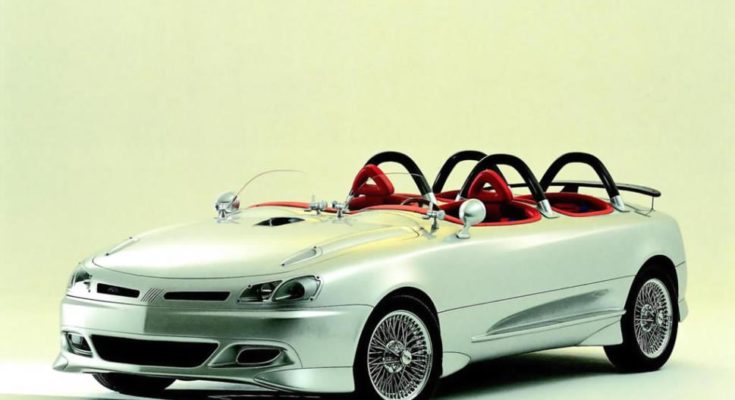 We are usually accustomed to defining Italian concepts as different, stylish and beautiful. Especially those created in the 1990s and painted by Giorgetto Giugiaro. It is strange, then, why this concept of filming may correspond to only one of these virtues – it is different. It was created at the end of the 20th century and was the work of Giugiaro but could hardly be described as beautiful. Moreover, he is totally mistaken. That’s why.

The car is called Fiat Formula 4 and is a conceptual model built in 1996. What’s so wrong with it? Let’s start, for example, with retro spoke wheels. Would they look unique to some classic car, but to this modernistic for its time Roadster Coupe? Hardly.

The car itself, which has been retrofitted – some of the decorative elements are fitted with open bolts, the windscreens are two and have a retro shape and grip, the steering wheel is wooden and made by Nardi, and even the rear registration plate has retro styles.

Under all this splendor that can appeal to many people lies nothing more than the brutally boring platform of Fiat Bravo and the engine is a 5-cylinder engine with 147 hp. and was taken from the same car.

The most absurd in this car is the lack of doors, and for the ridiculous four-seater interior, which seems to be carved in the passenger compartment, it is even unwise to speak. The good thing is that the body can be dismantled and replaced with another.

The Fiat Formula 4 concept was created at a time when designers and engineers are tempted to design a car that can change its look to meet the needs of its owner. In this connection, this extraordinary Fiat can be converted from a leisure car into a pickup truck, van or whatever you think. The cupboards are made of plastic, but only that in the photos was officially presented to the public during the exhibition in Geneva.

An interesting fact is that after a few months Italdesign updated the body and showed it again, but this time not like Formula 4, but in a more conventional version called Formula Hammer, which is visible on the left of the picture.

Yet here is the argument that as many drawbacks as the Italian concepts have, they can be different and impress. And this is worthy of respect.