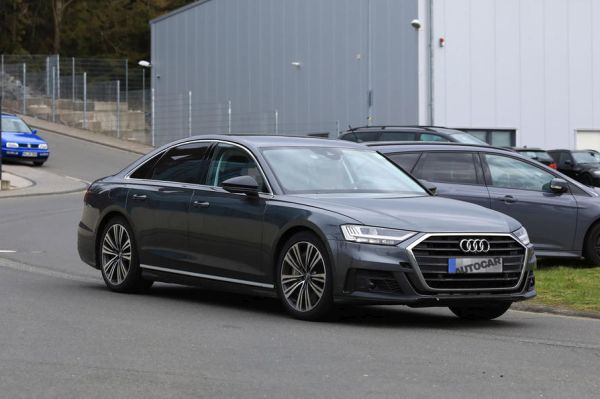 Audi is preparing to present a sporting version of the new generation of its A8 flagship. It has traditionally been named S8 and is currently being tested extensively on the Nürburgring track.

It is already known that the new Audi S8 will receive the 4.0-liter V8 TFSI that is placed on the Porsche Panamera Turbo. According to information from British journalists, the engine will develop a power of 542 hp. and 750 Nm of torque.

The sedan’s dynamic characteristics are not revealed, but for comparison, the previous generation of the model accelerated from 0 to 100 km/h in 4.1 seconds. This means that the new Audi S8 will be even faster, as it is more powerful than it is, with a lighter 95kg.

The design of the sport version of the flagship promises to be restrained and conservative. The test prototype captured at Nurburgring is distinguished by the huge braking mechanisms and the four exhaust pipes.

The new Audi S8 will be introduced in 2019. A standard version of the S8 Plus will be released after the standard Vaillant. It will receive the hybrid unit of the Porsche Panamera Turbo S E-Hybrid, which develops 640 hp. and 820 Nm of torque.