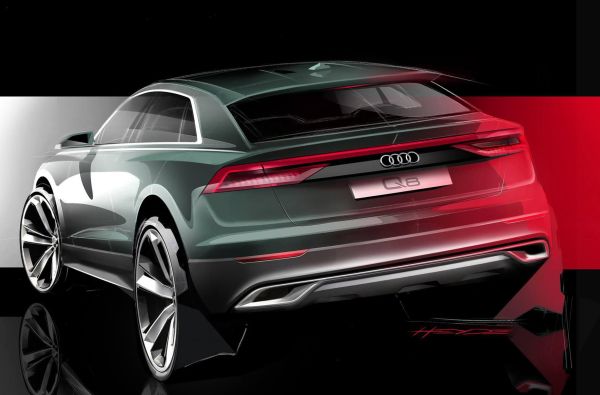 The German manufacturer Audi showed how the back of the Q8 will look. The coupe crossover will be presented in June, and it is clear from the sketch that it will almost repeat the design of the concept prototype Q8 Sport, which we saw at the Geneva Motor Show in 2017.

The company is not in a hurry to reveal all the details of the car for now. It is known that Q8 is the modular MLB platform on which Bentley Bentayga, Porsche Cayenne, Audi Q7 and other new Volkswagen models are built.

The engine range of the crossover will consist of turbo V6 and V8 aggregates. In the year 2019, two “inflated” versions – SQ8 engine with 435 hp SQ7 and RSQ8 – will compete directly with the BMW X6 M. Under the cover of this variant will be placed 4, The 0-liter twin-turbo V8 with 650 hp, which will be taken by Lamborghini Urus.

The cross-coupe will also be equipped with two hybrid modifications – petrol-electric and diesel-electric. In both, the internal combustion engine will have a volume of 3.0 liters.

According to preliminary data, the Audi Q8 will start at 110,500 EUR. The production of the model will be concentrated at the plant in Bratislava, where the Q7 is now being assembled.