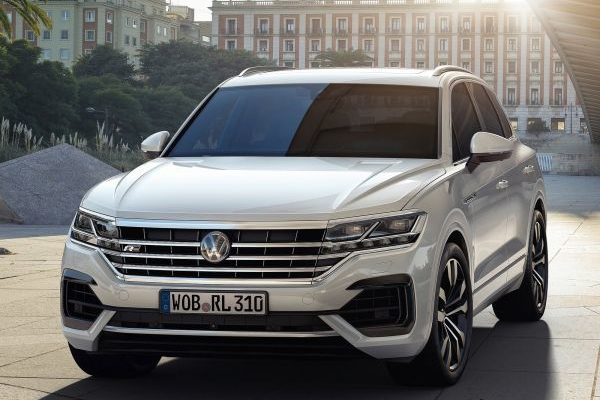 At a special event in Beijing, the German manufacturer introduced the new Touareg. Production of the third generation of the popular SUV as in the summer, with sales going mainly to the markets in China, Europe and Russia.

The new Touareg was built on the MLB platform, which was used by the latest generations of the Audi Q7 and the Porsche Cayenne. The SUV has grown in size compared to its predecessor – its length is 77 mm longer and the width – 44 meters. It is, however, lower by 7 mm. The volume of the boot was increased from 697 to 810 liters.

Though it is bigger, the Touareg is lighter. He has pulled 106 kg. thanks to the use of aluminum in the construction – this material is 48% of the bodywork. The other 52% are of high-strength steel.

At the start of the sale the SUV comes with two diesel and one gasoline engine. The basic version will rely on the 3.0-liter V6 TDI with 231 hp. and 500 Nm. The same engine will also be available with 285 hp. and 600 Nm. The most powerful diesel in turn is the 4.0-liter V8 TDI – the same as the Audi A8 and Bentley Bentayga. With the Touareg he developed 421 and 900 Nm.

The gasoline variant has been powered by a 3.0-liter 6-cylinder turbocharger that develops 340 hp. and 450 Nm. It replaces the current 3.6-liter V6. The petrol engine will also be used in the hybrid version, which will rely on 367 hp. This modification will now be available only in China.

All versions of the new Touareg have received an 8-speed automatic transmission. The transmission selector is similar to the Audi Q7, where a compact joystick is used instead of the classic lever.

The 4Motion four-wheel drive system is steady and can transfer up to 70% of the torque and front wheels and up to 80% on the rear. Control electronics have 5 modes of operation on heavy terrain – “Automatic”, “Snow”, “Sand”, “Grass” and “Expert”. In the latter, all electronic assistants are excluded and do not interfere with the management.

The new Touareg is the first SUV in the history of Volkswagen with a rear-wheel chassis. At a speed of up to 37 km / h, they curve in the opposite direction to the front, relieving maneuvering. This reduces the radius of turn. At higher speeds, the rear wheels turn in the same direction as the front wheels and thus improve resistance.

When changing generations, the SUV has retained its pneumatic suspension, but it has been reworked. In the standard mode, the Touareg road clearance is increased by 25 mm. When turning on a special off-road mode the bodywork is raised by 70 mm.

At speeds above 120 km / h, the vehicle drops 15-25 mm to improve aerodynamics. Thanks to its revised suspension, Volkswagen’s SUV can overcome a 570 mm deep (490 by its predecessor).
Following the change of generations, Touareg has received several new safety systems. He can move himself in traffic jams (up to 60 km / h). The system is called Roadwork Line Assist, and after activation, the machine only maneuvers, supports the lane, accelerates or stops completely.

The SUV can also be ordered with a night vision system where the electronics process the image obtained from a special camera built into the middle of the front bumper. A picture of visible pedestrians or people appears on the electronic instrument panel.

No Touareg equipment level will be available with analogue devices. They are replaced by a 12-inch touchscreen display on which all readings are displayed. Next to it is a 15-inch monitor of the multimedia system.
The SUV has also received a matrix optics that works on the same principle as the Audi headlights. The light can be adjusted depending on the surrounding environment – city, highway, out-of-town road, etc.

The Touareg has also received a long-distance driving system and has 128 LEDs in each lighthouse. Some of them are extinguished when needed, so as not to dazzle the driver of the coming car.

Among the options there is a massage of the seats with 8 programs, an emergency stop system, a windscreen projection display and 21-inch wheels. Also, this SUV has received USB ports, with a total of 4. This was not even the top versions of the front model.