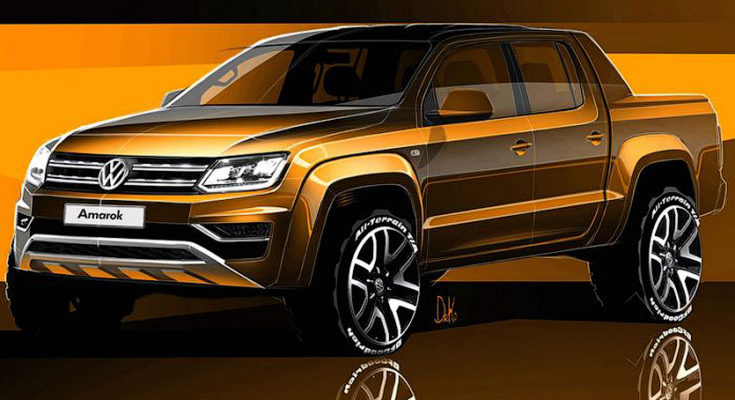 Volkswagen has released the first facelift sketches of its Amarok model. The German manufacturer described the machine as a “premium pickup” and announced that the changes would affect both its exterior and interior.

Judging by the images, after the facelift Amarok will be equipped with upgraded front and rear bumpers, a slightly modified radiator grille and refined headlamps and tail lights. In the interior will appear a different instrument panel and touch screen of the multimedia complex.

No pickup engine data is currently reported but is expected to keep the current. Amarok is available in Europe with 2.0 liter diesel engines. The first is one turbine and develops 140 hp and the second one with two 180 hp. Transmissions are a 6-speed mechanical and an 8-speed automatic.

It is expected that the new pickup will appear in the markets at the end of the summer or early autumn. The model will continue to be produced at the Volkswagen plants in Pacheco (Algeria) and Hannover (Germany). In the beginning of 2017, Amarok will also be assembled at the company in Reisling (Algeria).