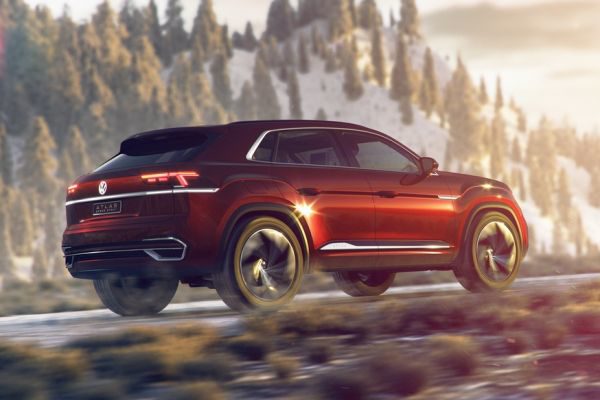 Last year, Volkswagen launched a 7-segment crossover that is called Atlas in the US and sold in China and Russia as Teramont. The car is produced in the United States and China, and at the New York Exhibition in April this year was presented its version with 5 seats, but in the form of a conceptual model – Atlas Cross Sport.

It is now clear that it will be available on the market, unlike the 7-seater, it will be assembled only in China, where it can be exported to other markets. The variant version will receive three-row headlamps in the style of the original model, but the rear stands and bumpers will be different.

The dimensions of the car are not yet clear. The concept Volkswagen Atlas Cross Sport was 4846 mm long, 190 mm less than the American Atlas and the Russian Teramont. The distance between the two axles, however, is the same – 2979 mm. At the same time, the Chinese version is 5039 mm long and its wheelbase is 2980 mm.

So far there are no data on the technical characteristics of the car. The prototype shown in New York was equipped with a 360 hp hybrid unit that can be charged from the power grid. It includes a 3.6-liter V6 atmospheric, two electric motors – one on each axle, and a lithium-ion battery with a capacity of 18 kW/h. The range on electric drive is only 42 km.

At the premiere of the Atlas Cross Sport Volkswagen announced a forthcoming hybrid unit, but with a lower power output of 314 hp and a lower battery of just 2 kW/h. Electricity is not provided for it. It is likely that this unit will also get the serial model.