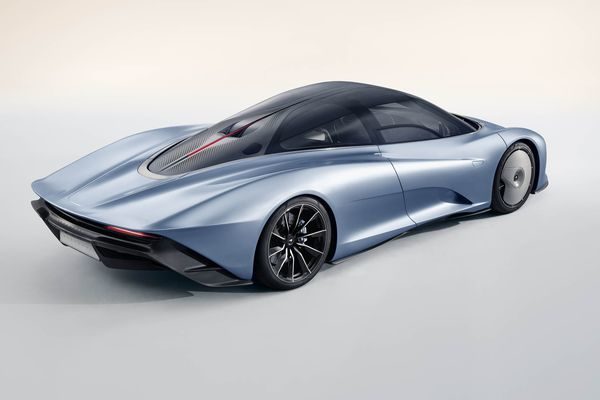 Finally, McLaren introduced its new top model – Speedtail, which has the difficult task of being the heir to the legend of the mid-90s F1. With a price of almost 2.3 million USD and a top speed of 402 km/h, Speedtail marks the start of a new era for the British company. The new model, naturally, has the ambition to be the rival of the world’s most expensive and luxury cars – like Bugatti Chiron.

But the two cars use a different philosophy to reach impressive speeds – with Chiron at the forefront of brutal power – 1,500 horsepower, while McLaren has a lot more to do with aerodynamic efficiency.

The Speedtail body is made of fiber-carbon and is designed to have minimal aerodynamic drag and designers have removed as many elements as possible to make aerodynamics worse. Like side mirrors that have been replaced by removable cameras.

Speedtail retracts the cameras in the doors as it moves in the Velocity mode and with it the clearance of the car is reduced by 35 mm. In the rear there appear two auras, which have a role in both acceleration and braking. Speedtail’s power is 1035 horsepower coming from a hybrid petrol-electric system.

The car accelerates from 0 to 299 km/h in 12.8 seconds, which is 2.7 seconds faster than the McLaren P1 with a horsepower of 903 horsepower. The company still has no confirmation of what the Speedtail engine is, but it is supposed to be a variant of the 4-liter V8 with two turbines and a power of 789 horsepower like the Senna, but it works with a more powerful electric motor than the hybrid system of P1.

The Speedtail cab is in the form of a drop and the driver’s seat is in the middle, just like the F1, and on both sides are the passenger seats. McLaren plans to produce only 106 Speedtail items, all of which are reserved and the first cars are scheduled to begin shipping in early 2020.