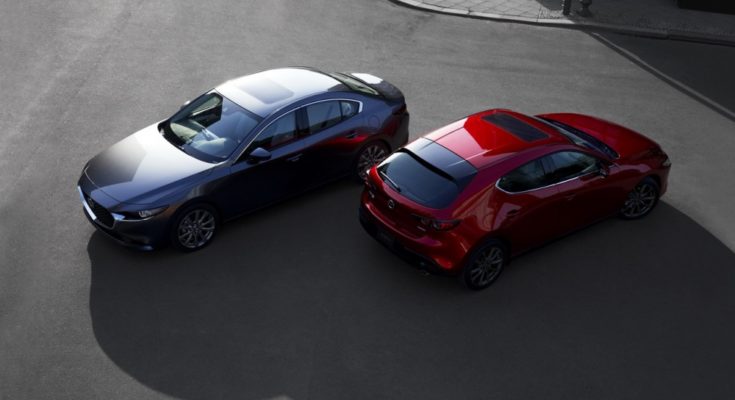 Among the most anticipated premieres in 2018 was that of the new Mazda 3, which was presented at Los Angeles Motor Show in two versions – a 4-door sedan and a 5-door hatchback. As expected, the model is bigger and more luxurious than its predecessor, while at the same time it has received new technologies. Some of them, however, remain secret.

The design of Mazda 3 is in the style of the concept Mazda Kai with clearer and more elegant lines. In the sedan, however, there are elements of another development of the Japanese manufacturer – Vision Coupe, which received the award for the best conceptual model of the year.

The main differences from its predecessor in the massive radiator grille, the narrow front optics and the dynamic design with slightly concealed front stands. The interior of the Mazda 3 has been completely redesigned and a very complicated front panel has appeared in the saloon. There is an 8.8-inch multimodal display, a new 3-spoke steering wheel and original materials.

Particular attention has been paid to the quality of the skin as well as to the new gear shift lever on the central tunnel. They are made using a laser, the idea is to give a special depth to their glossy surface.

Technical information about the model is almost missing. It is known that the new Mazda 3 is built on the SVA platform with a McPherson suspension front and completely different in the rear. In the range of engines will come petrol aggregate with a volume of 1.5 to 2.5 litres, as well as 1.8-litre diesel, their characteristics so far not reported.

As for the new SkyActiv-X petrol engine with compression ignition (this technology has so far been used only for diesel engines), it was not mentioned the company for the time being. Mazda has just announced that it can become part of a new hybrid system.

But the Japanese report that the Mazda 3 will be available with a new four-wheel drive i-Activ. The list of electronic assistants includes the previously shown G-Vectoring Control Plus system, which debuted in the CX-5, as well as an assistant detecting other vehicles and a driver’s status control system using infrared cameras.