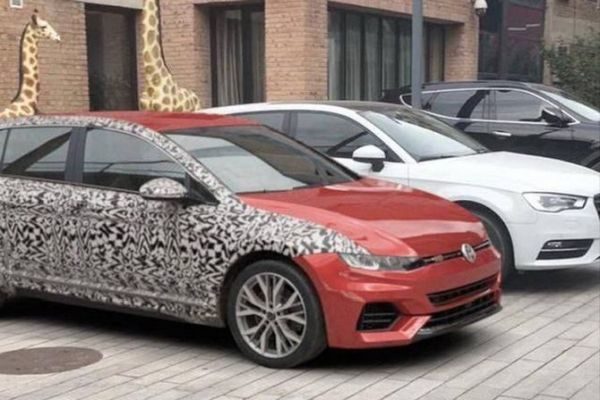 Before launching a new model for sale, car makers test it on public roads. In order to protect the exterior from the curious looks, the prototypes are covered with camouflage and there is nothing new. We are also looking to see the eighth generation of Volkswagen Golf, but perhaps we already know how the new hatchback will look like.

Despite the pictures showing the upcoming new generation of the model, whose bodywork is practically not covered with camouflage, which allows to see very interesting details, apparently not everything here is so simple. Very strange seems to be the decision of the company to leave the hatchback in a parking lot, though corporate, with almost no concealment of his design.

On the other hand, it can be expected that the pre-season prototype will be further modified, which will help to secrete the true design of the new generation. In any case, we look at the pictures of a car that really wants to make us believe that this is the new Volkswagen Golf.

The car was shot on the territory of the VW and Audi R & D Center in the Chinese capital. Assuming the fact that we are facing the VW Golf Mk8, the model will obviously have serious changes in the exterior. Starting from the fact that it does not look like any of the previous generations.

First of all, it is worth noting the new aggressive front bumper and very narrow headlamps. There are other interesting changes in the back, for example headlights have a completely new complex shape, as well as two exhaust tailpipes. Is that the VW Golf GTI? Is that what the inscription on the false radiator grid does not suggest?

The most cardinal changes are in the profile – a lower and dynamic silhouette with narrower windows. The shape of the doors is different. Unfortunately, there are currently no pictures of the interior, but, of course, it would be too much at this stage. Whether the overall look of the car is in line with the new hatchback, we will find out a little later when the Volkswagen Golf from the 2020 model begins to get more details.