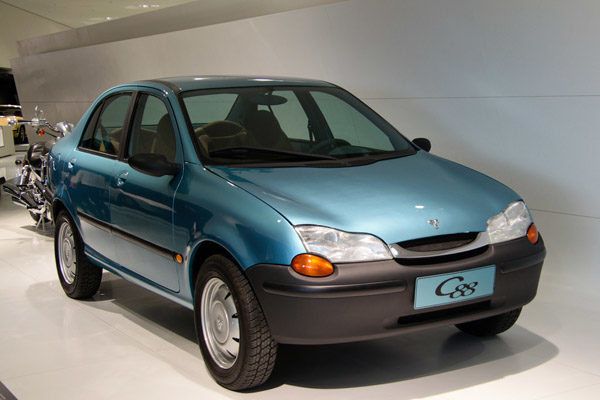 Porsche’s history remembers a few concepts designed only to demonstrate the potential of the German brand. Usually, the company shows cars that are close to serial production. This is also true for this forgotten model – the S88, which was developed for just four months and its premiere was scheduled for the Beijing Motor Show in 1994.

Porsche S88 sedan was created by the Chinese government, which at that time organized a competition for a compact mass model. Several Western companies, including FIAT and Opel, were participating in the race. The requirements for the car were relatively simple: to have five seats, low price and produced by the first Chinese car giant FAW (First Auto Works).

Porsche accounts show that at a price of C88 of 88,000 CNY, or just over 12,670 USD, the requirements of the Chinese government can be covered. The finished car was personally presented by Porsche Director Wendelin Wiedeking.

The interior is dominated by the so-called “Bionic design”.

Porsche has also created a new logo for the C88 – triangle with three points on the tops, which symbolizes the traditional Chinese family – two parents and one child. In the 1990s, China’s birth rate policy was still something the authorities kept strictly, and that changed only at the beginning of the second decade of the new century.

But the Chinese government closed the China Family Car project in 1995, the contest also finishes so infallibly without being declared a winner, and Porsche reacted very quickly and sell the design rights and technology used by the C88 to several Indian companies. Today, the S88 can be seen in the Porsche Museum.