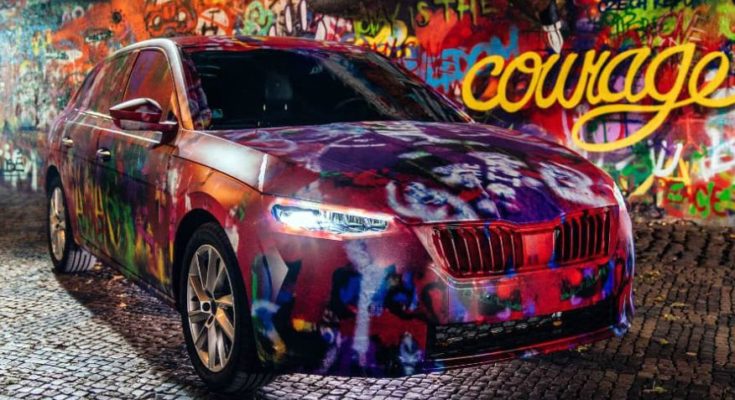 Already in October, the Czech manufacturer Skoda announced the upcoming release of a new model, called Scala, which will replace Rapid in the brand range. The future hatchback will be presented at the Geneva Motor Show in March next year, but the production company is already warming up to an audience.

For this purpose, the new Scala, painted in a rather strange way, was exposed in Prague. This is the place of the Maltese Garden in the capital of the Czech Republic. Here, in the 1980s there were regular inscriptions or paintings dedicated to the legendary Beatles musician.

The strange camouflage is the work of a Czech artist whose pseudonym is Chemis. It has made the car look as if the paintings have been stacked over for many years – just like on Lennon’s wall.

It is already known that the future Skoda Scala is built on the modular platform MQB. The length of the hatchback will reach 4,362 mm, the width is 1,793 mm and the height is 1,471 mm. The distance between the two axles is 2,659 mm and the rack will hold 467 litres.