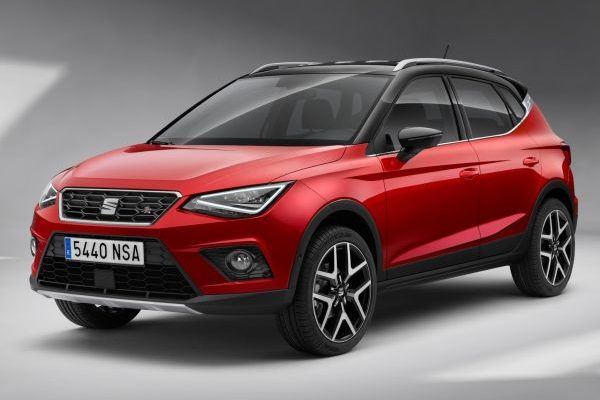 Spain’s second crossover of the SEAT brand was officially presented at a ceremony in Barcelona. The model is named Arona, with its official premiere at the Frankfurt Motor Show in the autumn.

The compact SUV is built on the MQB A0 platform, which debuted on another Spaniard model – Ibiza hatchback, shown earlier this year. The new Arona will be placed under Ateca in the manufacturer’s model range.

The car has received a thin front grille on the radiator, which is surrounded by triangular light-emitting diode headlamps. The machine has a large air intake, plastic body fuses and artificial aluminum bumper accents. The key elements of the design include LED tail lights, a contrasting roof and a rear spoiler aerodynamic spoiler.

As a size, Seat Arona is 79 mm longer than the new Ibiza – 4138 mm, and is also 99 mm taller. This provides more clearance and more space in the gym. The volume of the trunk is 400 liters. The seats are higher and, in addition to greater convenience, also provide easy entry and exit of the passengers.

The layout of the gym is simple but functional. The crossover has received a 3-spoke steering wheel and metal accents. There is also an infotainment system with an 8-inch dashboard display (Android Auto and Apple CarPlay), a reversing camera, a cordless charger, and more.

The model offers a large number of options for interior and exterior layout, as well as various options. For example, there are 68 optional color combinations, and adaptive cruise control, blind tracking system and other equipment can fit into the equipment.

Arona’s range of engines will depend on the markets. It will include a 1.0-liter TSI 3-cylinder TSI engine developing 95 or 115 hp. The sports version of FR relies on a 1.5-liter, 150 hp, 4-cylinder engine.

Customers will be able to choose between 4 levels of equipment – Reference, Style, FR and Xcellence, while Arona’s sales will begin right after the Frankfurt showroom.