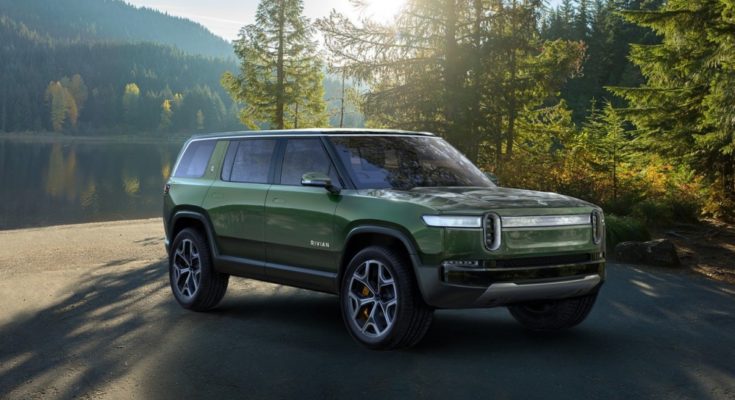 Rivian Automotive introduced its second model, a 7-seat SUV, powered by four electric motors. The machine is called RS1 and will accelerate from 0 to 96 km/h in only 3 sec.

The first model of the company was the R1T, which also has an electric drive. The SUV has received the same “face” with a square design and LED optics. By the front stands the two electric cars are completely identical, but then the RS1 follows its own style.

The length of the SUV is 5,040 mm and the ground clearance is 365 mm and can be changed thanks to the pneumatic suspension. The RS1 can overcome a ditch with a depth of up to 1.00 m, the angle of approach to the obstacle is 34 degrees, and exit from it – 30 degrees.

Rivian R1S will be produced in a 5- or 7-seater version, with the customer choosing between 3 different power units. The four electric motors can develop 408, 710 or 864 hp, and the one-battery cycle will range from 380 to 660 km. The fastest option accelerates to 96 km/h in 3 sec and the next for 3.2 sec.

Like the pickup, the SUV will be equipped with a digital instrument panel and a large screen of the 15.6-inch multimedia system. The electric car will teach an additional 6.8-inch rear-seat passenger display as well as a third-level autonomous control system.

Rivian estimates R1S at least 65,000 USD, which is 4,000 USD more than the RS1 pickup. The two models will be assembled at a factory in Illinois, which the company bought from Mitsubishi for 16 million USD. Production is due to start next year and first deliveries to customers will take place in 2020. The projected annual production volume in the middle of the next decade is 60,000 units.