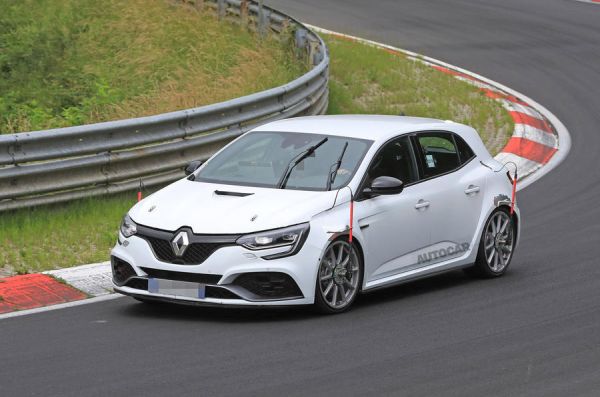 Renault has begun testing the fastest version of the “inflated” hatchback Megane RS, whose new generation was released earlier this year. The modification will traditionally receive a Trophy supplement to its name, and will try to set a record for the Nurburgring Nordic arc among the front-wheel drive.

The new Renault Megane RS Trophy will rely on an upgraded 1.8-liter turbocharger whose power will be increased from the current 280 hp. and 390 Nm of torque to 300 hp. and 400 Nm. The engine will combine both a 6-speed manual gearbox and a robotic EDC transmission.

The new modification will be different from the standard RS also on the rear suspension, the 19-inch alloy wheels, and the revised aerodynamic body elements – the modernized front diffuser and the rear spoiler. Because of the record attack, the machine will remain without rear seats as well as without a number of elements of the interior and soundproofing.

According to preliminary data, the Renault Megane RS Trophy will be shown at the Paris Motor Show in October and the record attack is planned almost immediately after the premiere. Currently, the best achievement of the North Arc in the front-wheel drive belongs to the Honda Civic Type R. The Japanese hot hatch with a 2.0-liter 320-horsepower engine traversed the course for 7 minutes and 43.8 seconds.