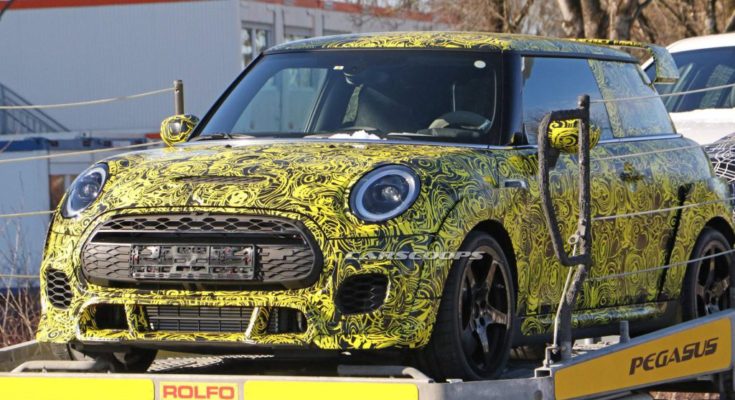 The Mini released official photos and details of its most powerful car – John Cooper Works GP – and shortly thereafter the car was caught by spy photographers. This is the first appearance of the production model after the debut of the Mini John Cooper Works GP Concept at the Frankfurt Motor Show in 2017.

As you can see, the little car comes with serious intentions, showing extreme body kit on the Mini Hatch.

The most obvious in the model is the massive split rear wing, which seems to be taken straight from a racing car, but the JCW GP has something to surprise. For example, expanded fenders and aggressive bumpers that include a splitter at the front and a diffuser at the rear. Other distinguishing features of the design are the central pair of exhausts and wide wheels.

The GP package comes with larger brakes and improved suspension, as well as the use of lightweight materials. To make the car as light as possible, the rear seats have been removed but will probably be featured as an option.

Limited to 3000 units, the Mini JCW GP is fitted with a 2.0-liter 4-cylinder turbocharged engine that produces more than 300 horsepower. The fastest and most powerful Mini, which will be legal, is expected to debut at the end of 2019 (probably at the Frankfurt Motor Show in September), with deliveries coming in early 2020.