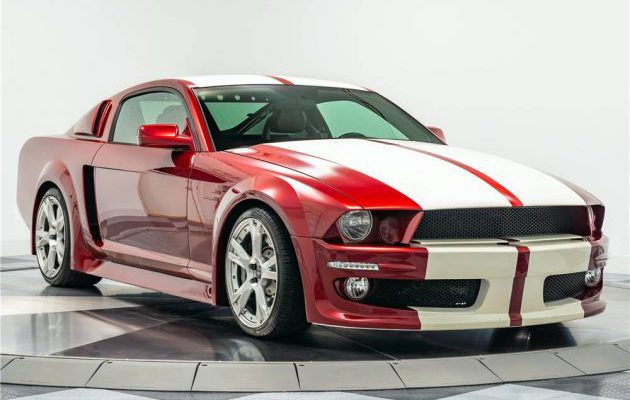 The last thing any car lover expects to find under the hood of 2007 Ford Mustang is the engine, transmission and all-wheel-drive system from Lamborghini Gallardo.

But this is the fifth-generation Mustang, which collects a lot of the Lamborghini Gallardo parts. The only car is built for the SEMA show and features a 5.0-litre V10 engine attached to a 6-speed Gallardo automatic transmission.

More than 700,000 USD were invested in the project, which was named Tractorri Custom Coupe as a tribute to the start of Lamborghini as a tractor manufacturer. While it may look like Mustang, the bodywork is completely unique and includes Porsche 911 Turbo, metal fenders, as well as the Lamborghini Gallardo rear lights.

As you can imagine, installing the V10 in the middle and connecting it to the E-gear transmission and all-wheel-drive system have led to significant modifications underneath the bodywork. The car even has a front-lift system, also available in the Lamborghini.

Inside, the Tractorri Custom Coupe features the Gallardo dashboard, modified to fit into the Mustang’s compartment. The central console and seats come directly from Lamborghini, along with HVAC switches and controls. The unusual hybrid features an original Alcantara ceiling, door panels and illuminated thresholds. The factory keyless system of the Italian car has also been added.

The car has only reached 4,126 km and will go to Barrett-Jackson’s Scottsdale in January.