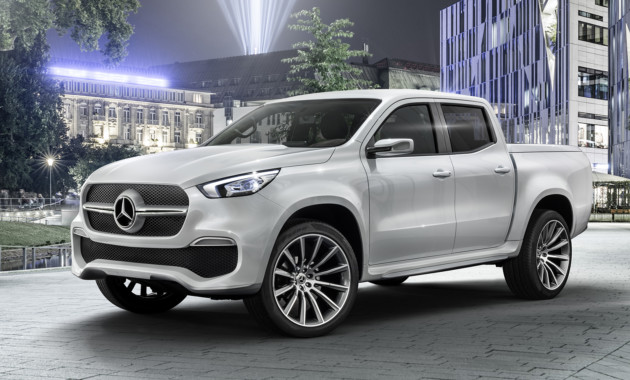 Mercedes-Benz officially presented a prototype of its first mid-size pickup truck. The model was named X-Class and its presentation took place at a special event in Stockholm.

As you know from earlier, the model will rely on some of the Nissan Navara units and components whose platform it uses. However, the top-of-the-range pickup will be equipped with a 3.0-liter V6 diesel, also fitted to the current German manufacturer. Probably the 258 hp engine. This version also includes a four-wheel drive system as well as a central and rear differential lock.

The German model will be able to carry a payload of 1.1 tons and the maximum weight of the towing attachment will be about 3.5 tons. The pickup comes in two options – stylish explorer and powerful adventurer. The first is white and is equipped with 22-inch wheels, integrated bodywork, LED lighting in the cargo compartment, leather-trimmed seats and wooden interior elements.

The second one has received tire shields, protecting the lower part of the body, which is made of carbon, like an electric winch. This version of the X-Class is in yellow-green color. The equipment of both modifications includes a multimedia system with an integrated SIM card, a remote monitoring system with the help of a smartphone application, additional security assistants working with cameras, radars and sensors.

Sales of the pickup will be launched in the spring of 2017, with production being carried out at Nissan’s Barcelona plant and at Renault’s Argentine. The main X-Class markets will be Europe, Brazil, Argentina, Australia and South Africa.