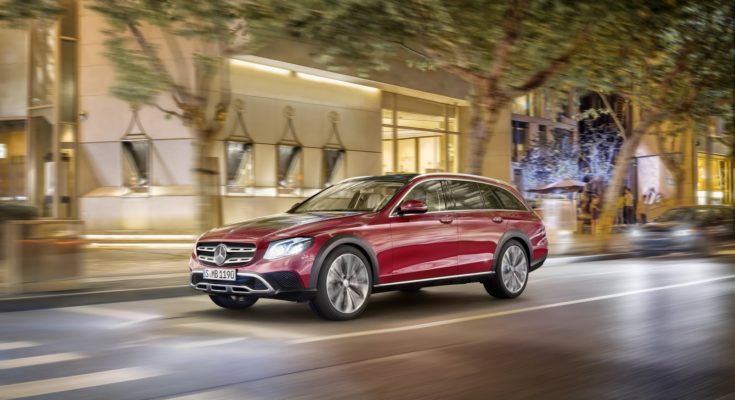 Only a few months ago, Mercedes-Benz revealed that it is preparing an all-new version of the new generation E-Class. The model is ready and will be presented to the public at the end of this month at the Paris Motor Show.

The Mercedes-Benz E-Class All-Terrain, as the full name of the model, was created as a direct competitor for the Audi A6 Allroad, Volvo V90 Cross Country and Subaru Outback. It is equipped with the required for such machine increased clearance, propulsion to the four wheels and distinctive design.

The car also comes with its four-wheel drive system, 4Matic, which is programmed with new settings for better performance on bad terrain. Equally standard is the Air Body Control adaptive air suspension, which allows adjustment of up to 35 mm clearance. Thus the clearance of the model can vary between 120 and 156 mm.

The E-Class All-Terrain equipment also includes special wheels and tires that provide maximum terrain and comfort on any terrain, the message says. The electronic system with different modes of operation – Dynamic Select, is complemented by a new off-road movement feature. It changes the settings of the stability, suspension and traction systems.

During the Paris Motor Show, the model will appear in a single version – the E220d 4Matic All Terrain. It relies on a 2.0-liter diesel with 194 hp. and 400 Nm. The acceleration of 0-100 km / h in the model takes just 8 seconds and the maximum speed is electronically limited to 232 km/h. At the beginning of next year, the range will also include a more powerful 6-cylinder Diesel E350d.

All details, including prices, will be unveiled at the Paris premiere.