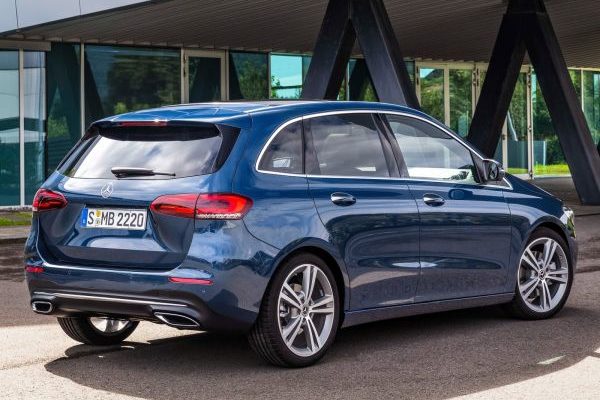 The German manufacturer Mercedes-Benz used the Paris Motor Show to present the third generation of the B-Class. The car comes with five engines, three of which are diesel. Sales start in December and the first units will be delivered to customers in February 2019.

The design of the minivan is much more daring than ever before, giving the model a dynamic appearance. The roof line is lower and the rims are larger – from 16 to 19 inches (the second generation was only 15 inches high). The drag coefficient is one of the best in the class – 0.24 (at the old B-Class it was 0.25).

The driver’s seat is 9 centimeters higher than the A-Class, but the seat belt is lowered and thus increases the sense of space. The seat adjustment range is larger and the overall saloon width is 33 mm longer.

The new B-Class has received a tweeted multimedia display – the same as the A-Class. The base unit includes two 7 inch diameter screens, which can be replaced together or separately with 10.25-inch displays. The right is touch-sensitive, but it’s more convenient to use the black touchpad with a matte surface.

Images of most functions can be adjusted using the touch-sensitive keys on the steering wheel. A projection display of the front squeegee, which is identical to the size of the A-Class – 24×8 cm, is available at an additional cost.

The volume of the trunk has been preserved, with some modifications even smaller. Its minimum volume is 455 liters (488 in the current generation) when the rear seats are moved forward. If in this case the backrests are upright and the seat is pushed forward, the luggage compartment can hold 705 liters (so far the volume in this position was 666 liters). The volume is 1540 liters in the rear seats.

The new B-Class has learned a multimedia MBUX system that can learn and remember the driver’s preferences. She responds to the address “Hey, Mercedes”, understanding the questions and commands in a filing form. The system can search for rest or meals by updating online. She discovers free parking spaces and warns the owner if they try to steal or raise the car.

The minivan also has a semi-automatic propulsion system – the same as the S-Class. Radars and cameras allow the vehicle to move independently in its ribbon and rebuild, keeping the column speed, stopping completely and then resuming movement.

B-Class debuts a new 2.0-liter OM 654 diesel engine that meets the Euro 6d standard in force in 2020. The power of the engine is 150 and 190 hp, with the more powerful version consuming only 4.5 l / 100 km. This unit works in combination with an 8-speed automatic transmission.

The smaller diesel is 1.5-liter, developing 116 hp. and a 7-speed automatic transmission is available. It is also available for the 1,33-liter gasoline engine developing 136 and 163 hp. At a later stage, four-wheel drive versions will also be available.

In all variants, the front suspension is McPherson, while the rear is dependent on the engine. In weaker versions, it is torsion, and in the weaker versions – four-point. A comfortable option will be offered, as well as a sporty, adaptive shock absorber, whose mode will be adjusted via the Drive Select menu.