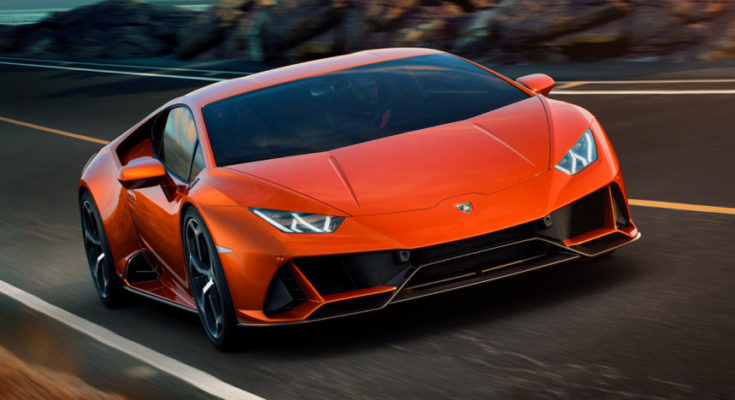 Lamborghini introduced the renewed Huracan. The car has received a revamped design, the Dynamics Control System with a new algorithm of operation, the Huracan Performante engine, a new entertainment system and a new name – Huracan Evo.

The sports compartment differs from the previous version, as the front bumper has an integrated splitter, increased Y-shaped air intakes, new wheels, two exhaust pipes and a spoiler. The bottom of the car is optimized due to the increase in compressive force and aerodynamic efficiency, which has increased 5 times compared to the first generation of Huracan.

The Lamborghini Huracan Evo is equipped with swinging rear wheels and a thrust vectoring system that flexibly distributes the torque between the four wheels. In addition, the supercar received a Lamborghini Dinamica Veicolo Integrata (LDVI) dynamics control system with a predictive algorithm. This technology in real mode processes the data for the transverse, longitudinal and vertical acceleration, as well as the possibility of tilting in a bend. Thanks to the information received, the hardness of the dampers can be changed, as well as the operation of the four-wheel drive system and the skid system.

Additionally, the LDVI can adjust the steering angle, determine the most suitable gear and adjust the brake pedal intensity by pre-detecting the driver’s intentions using the pre-selected driving mode.

The Lamborghini Huracan Evo is powered by the 5.2-litre V10 engine with titanium valves and a lightweight exhaust system. The power of the engine is 640 hp and 600 Nm, allowing acceleration from 0 to 100 km/h in 2.9 seconds and up to 200 km/h in 9 seconds. The maximum speed is 325 km/h.

In the salon, traditional buttons and switches have been replaced by a touch screen with a diagonal of 8.4 inches. The complex works with Apple CarPlay and Android Auto as well as a Siri Voice Assistant and a company telemetry system that has two cameras.