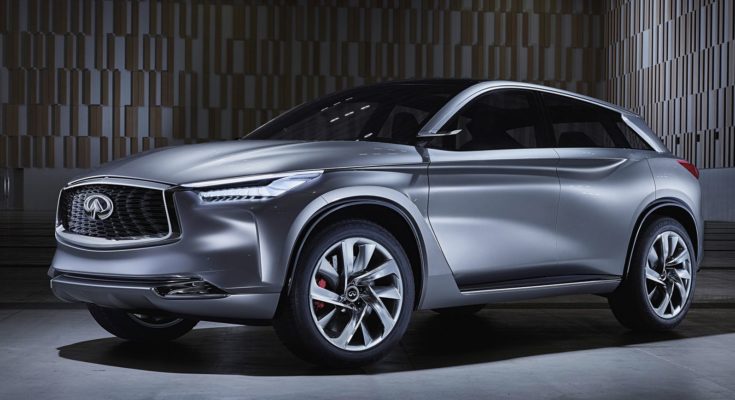 A few days before the official opening of the Beijing Motor Show, Infiniti revealed the concept of the QX Sport Inspiration, which will have to show how the brand’s next average crossover will look.

With the launch of a similar model, the Japanese luxury car maker plans to move into the segment of the cross-coupe, dominated by BMW X6 and X4 as well as the Mercedes-Benz GLC Coupe. The Japanese machine impresses with its high clearance – 230 mm, yet it will still have the typical features of the brand – dynamics and driving pleasure.

The length of the crossover is 4600 mm, the width is 1900 mm and the height is 1650 mm. The distance between the two axles is 2800 mm. The design of the car is entirely subordinate to aerodynamics, with side mirrors replaced by cameras.

The QX Sport Inspiration saloon is as simple as missing familiar buttons and switches. In the front are two monitors, emitting data from the cameras that replace the mirrors. A touchscreen is also located between the front seats, where passengers can choose the air conditioner settings.

The choice of motion mode is changed by a disk-shaped controller and the gears are replaced by special levers mounted on the steering wheel. However, there is no data on the vehicle unit, as Infiniti has focused on the appearance and equipment of the machine.

According to the acquaintances, however, the crossover will almost certainly be hybrid drive, most likely using the Q80 Inspiration concept, introduced in 2014. This model is equipped with a combination of a gasoline V6 and an electric motor with a total output of 550 hp.