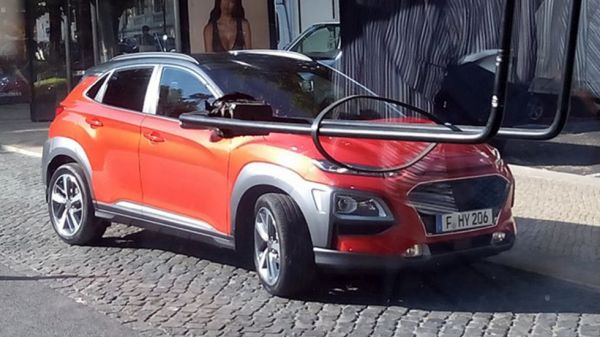 Earlier this year, Hyundai has officially announced that it is preparing for the launch of its smallest SUV model. It will be named Kona, and its premiere is clearly close since the car was filmed in Lisbon.

The photo appeared on the Carspotting Portugal website, according to information, during the preparation of the advertiser’s video clip. It is supposed that precisely because of this, the photo is the top-version of the future Hyundai Kona.

The crossover is built on the hatchback i20, but uses the larger i30. This means that the Kona will receive 100, 120 and 140 hp gasoline atmospheric and turbocharged engines, as well as 1.6-liter diesel engines with 95, 110 and 136 hp. It is almost certain that the model will only be available with front-end transmission.

The new Hyundai Kona is destined for the market in Europe where it will fight for customers with Renault Captur, Peugeot 2008, Nissan Juke and Opel Crossland X. By the end of the year, another major Korean company, Kia, is expected to produce an identical SUV model .