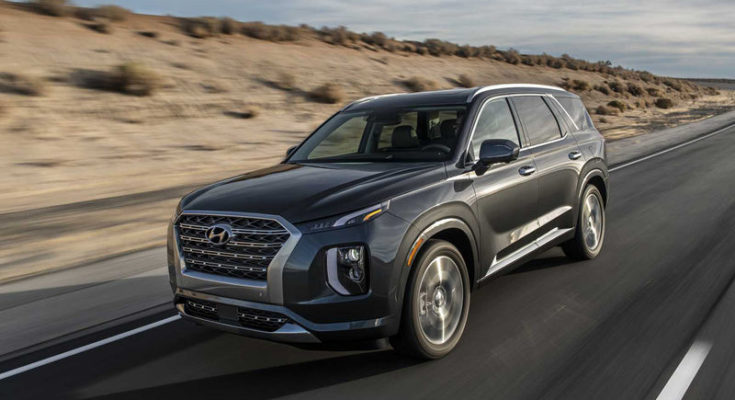 One of the anticipated premieres of 2018 is a fact – at Los Angeles Motor Show, Hyundai introduced the serial version of its 8-seat crossover Palisade. The new flagship of the Korean brand replaces Grand Santa Fe (also known as Santa Fe XL), positioning itself at a higher level, and must compete even with the premium manufacturers’ cars.

However, some elements of Palisade are now repeating the new Santa Fe, as seen mostly in the front. There is the same large chromed grille on the radiator as well as a “two-story” optics with vertical base blocks placed in the front bumper. However, the rear-end with vertical stops is completely new and is not used at the level of a Hyundai series model.

The SUV, which will compete in North America with Honda Pilot and Toyota Highlander, looks impressive not only for its design but also for its size. Its length is 4,980 mm, with the distance between the two axes reaching 2,900 mm. The saloon can accommodate 8 people – 2+3+3, but the car still boasts the best aerodynamic drag coefficient in this class – 0.33.

The equipment is quite lavish, with the impression of 16 cup holders and 7 USB ports. There is also a huge 12.3-inch touchscreen display as well as a 10.25-inch multimedia display screen. There is no gearshift lever in the saloon, using large buttons located on the driver’s side.

The crossover is very technological, and besides the known active cruise control and other electronic safety systems, it also offers several Hyundai own developments. These include an Object Observation System in Dead Areas which, when turning on a turn signal, pays a picture of the side cameras on the screen in front of the driver. There is also a large projection display on the windscreen.

Of course, the car is well-equipped – such as a saloon, ventilation on the first two rows of seats, a cordless charger for various devices, an in-line system, allowing the driver to communicate with second or third-row passengers, and much more.

Hyundai Palisade also debuted a new engine of the Korean – 3.8-liter six-cylinder engine developing 291 hp. It works in combination with an 8-speed automatic gearbox and a four-wheel drive system HTRAC.