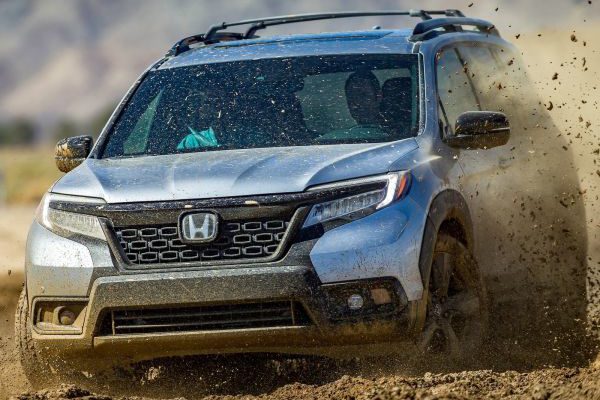 Honda is using the Los Angeles auto show to present its new crossover, which has renamed Passport. The model will take a place between the CR-V and Pilot in the brand’s range.

Honda Passport design shows that this is a true SUV. The machine has received additional body protection features and also the ability to attach different luggage. The ground clearance is 213 mm – compared to the US version of the CR-V and Pilot is 208 and 185 mm respectively.

The manufacturer positions the crossover as an “adventure car” segment, noting its ability to tow an extra cargo tug. The maximum target weight can be 2,268 kg. The volume of the trunk varies from 1,167 to 2,206 liters, while under the floor there is an additional compartment that can hold 71 liters.

At the core of the Honda Passport is the Global Light Truck platform with MacPherson suspension front and multi-lingual at the back. The chassis components are taken from the Pilot and the Ridgeline truck. The crossover is superior to the Jeep Grand Cherokee, with the distance between the two axles being the same as the Pilot.

The driver of the SUV comes from a 3.5-liter V6 engine with 284 hp and 355 Nm of torque. The transmission is a 9-speed automatic, which is Honda’s own development. Optionally, the four-wheel drive i-VTM4 (the same as the Pilot) is available to allow 70% of the torque converter to be displaced for the rear axle. It receives assistance from the thrust control system Intelligent Traction Management (ITM).

The production of the Honda Passport was launched in the spring, with major competitors being Ford Edge, Nissan Murano, Jeep Grand Cherokee, Toyota 4 Runner, and Chevrolet Blazer.