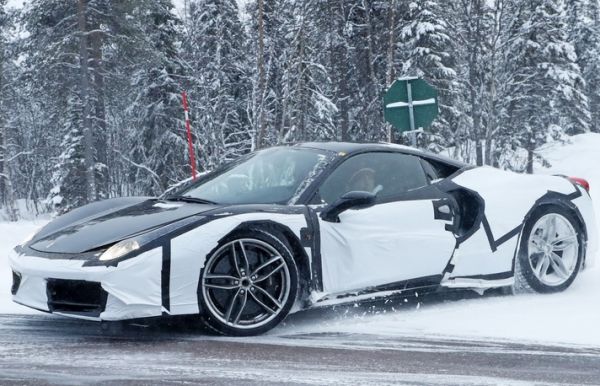 Testing of a new model in harsh winter conditions is being conducted by Ferrari. A prototype of the car using the Ferrari 458 body was shot in Sweden, and was revealed by Carscoops.

Already 2 years ago, Fiat-Chrysler Alliance chief Sergio Marchionne said the sports car maker will revive the legendary Dino, a matter of time. This car will take the place of the California model in the company’s range.

Carscoops back their claims that this is a completely new car with the sound produced by the prototype engine. In this case, the engine does not sound like V8, but V6. Most likely, it was the 2.9-liter package placed on the top-of-the-line Alfa Romeo Giulia sedan. There he developed 510 hp.

In the second half of the last century Ferrari used Dino to designate its models with smaller engines. The name goes into the company’s range in honor of Enzo Ferrari’s older son, Alfredo, who died only 24 years. In the family of Il Commandatore he is called Dino.