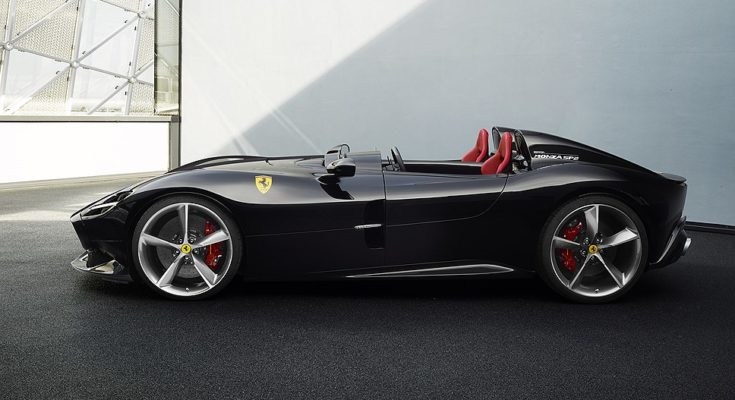 Ferrari introduced two exclusive Monza speeders. Cars built on the basis of the Ferrari 812 Superfast will enter the new model range of the Italian company Icona.

The cars were named Ferrari Monza – the SP1 version is one-sided (the first two pictures) and the SP2 is two-seater (the second two). The design of both models is inspired by the classic 166 MM, 750 Monza and 860 Monza sports cars from the mid-20th century.

The body of the speeder is made of carbon fiber. Monza also has new headlamps, wheels and interior features in the 812 Superfast. Due to the lack of a roof and a windscreen, the driver and traveler need to use a helmet, and Virtual Wind Shield technology directs part of the air flow away from the cabin for greater convenience.

The most characteristic of the two versions is that they are equipped with the most powerful engine in the history of the Ferrari – 6.5-liter V12, whose power is increased from 800 to 820 horses. The engine is combined with a 7-speed robotic gearbox and the rear wheel drive. Acceleration from 100 km/h takes 2.9 seconds and the maximum speed is 300 km/h, or 30 km/h less than the Ferrari 812 Superfast.

Especially for Monza SP1 and Monza SP2, the Loro Piana and Berluti brands have developed a collection of clothing and racing equipment in the style of both models. Versions will be released in a limited edition of 100 pieces and all cars planned for production have already been sold in advance.