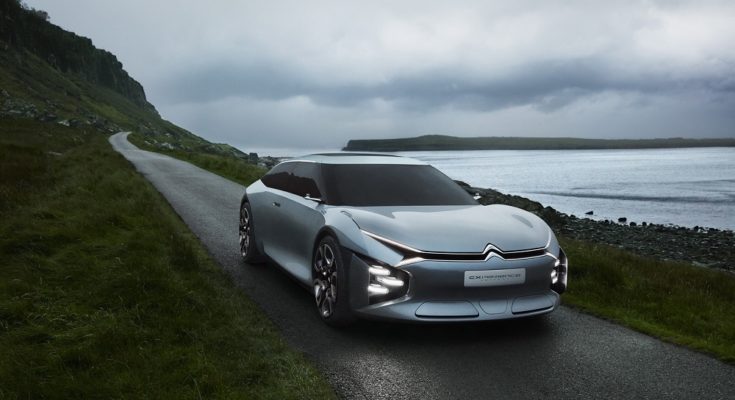 Big luxury sedans are not a specialty of French automakers, but Citroen hopes to change this with a brand new 5-meter car. It bears the name CXperience and will be presented as the concept of the upcoming Paris salon.

“CXperience is an attempt to bring our current design into a big and luxurious sedan”, says the French franchise release. The model relies on futuristic shapes, demonstrating an elongated but rather low profile. The length of the machine is 4.85 meters, width – 2.0 meters, height – 1.37 meters, and the wheelbase reaches 3.0 meters.

CXperience is more like a Shooting brake, or something between the Porsche Panamera and the Mercedes-Benz CLS. The doors of the French car are in Rolls Royce style – opposed, with no safety column between them.

The salon is built in harmony with the exterior, demonstrating modern design, expensive fabrics, natural materials and all-digital appliances. The 19-inch diagonal, 19-inch diagonal central screen acts as a dashboard and infotainment display, depicting the picture of the side chambers replacing the usual rear-view mirrors.

The Citroen CXperience’s powertrain is powered by a 300 hp petrol-electric unit, according to the information. The engine is coupled with an 8-speed automatic transmission and the batteries can be recharged in the grid, with electricity reaching 60 km.

An interesting detail in the model is the suspension that relies on hydraulic pillows – extra, which we are used to see in the top models of the brand.

More details will be released during the CXperience premiere in Paris.