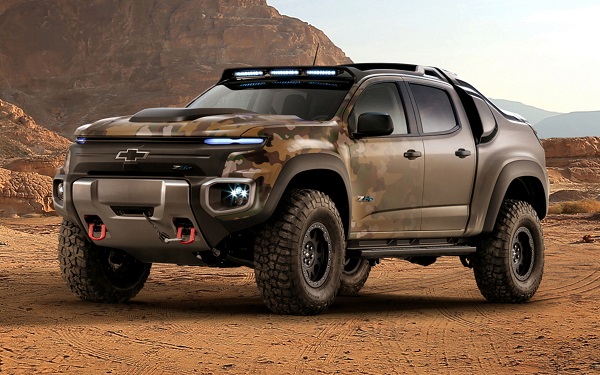 Chevrolet showed the ZH2, which will be powered by hydrogen and will be tested by the US Army to study alternative propulsion systems.

The prototype-developed military research and engineering center for tanks is powered by hydrogen fuel cells and the first tests will be launched next year. These will include overcoming extreme field conditions as well as performing heavy task specific to the battlefield.

Although the prototype is based on the standard Colorado, the similarities between the two cars are small. The chassis of the ZH2 is extended and reinforced, the dimensions being 2.1 meters wide and 1.9 meters high. The suspension has also been changed to make it compatible with the new 38-inch wheels, enhancing off-road capabilities.

Colorado ZH2 can be supplied with electricity from external sources. The system, which does not produce noise at work and is environmentally friendly, works by converting hydrogen into electricity and the residual product is water. Separate water can be used for everyday needs.

As far as the technical characteristics of the prototype are concerned, it does not stand in the way of an internal combustion engine, which has been replaced by the fuel cell with ZH2. The hydrogen traction generates high torque at all speeds and reduces the sound and heat trail of the vehicle.

Inside, the saloon is similar to the Colorado, but it features sports seats, and instead of a tachometer, a power meter is placed on the drive system. An additional safety bar is added.

However, there are some shortcomings. For example, this is needed by a mobile trailer station that can load the machine in harsh conditions. Another disadvantage is related to hydrogen. Substance is not the safest fuel because of the risk of lithium-ion batteries. Last but not least, soldiers should carefully monitor the remaining mileage, especially if the mobile station is not nearby.