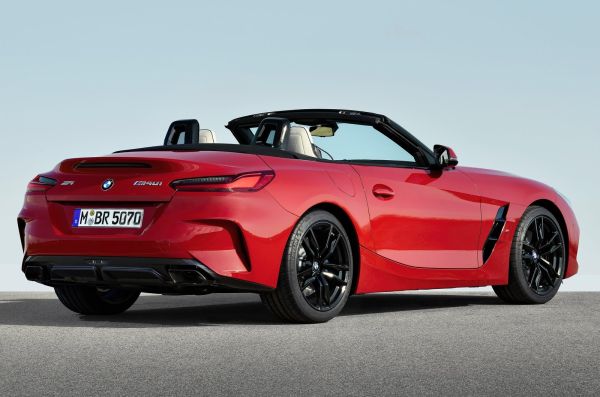 Just an year ago, BMW presented its conceptual Z4 roadster at the Peble Beach (California) design contest. Now the same exhibition has hosted the premiere of the model version.

The car was shown in the BMW Z4 M40i First Edition, whose body is painted in an exclusive orange color – Frozen Orange with metallic. And while designing, the serial model completely repeats the prototype of 2017.

The manufacturer claims that the new Z4 has an ideal 50:50 weight distribution between the two axles, and the compact size ensures excellent handling and gives the driver the real driving pleasure.

Under the bonnet of the BMW Z4 M40i First Edition, a 6-cylinder gasoline turbo engine is installed. Its volume is 3.0 liters and the power – 340 hp. The two-speed roadster accelerates from 0 to 100 km/h in 4.6 seconds. The machine is equipped with sports suspension with electronically controlled shock absorbers, M Sport braking system and rear differential M Sport, which is also controlled by an electronic system.

The orange body color combines with a black soft roof with silver effect. There is an additional package of glossy elements from BMW Individual, black hulls on exterior mirrors and 19-inch wheels in two colors with 5 twin spokes.

The interior has black Vernasca leather with decorative elements, the armchairs are adjustable with an electrical system and have a memory function. As an option, special lighting is provided in the Harman Kardon salon and audio system.

BMW has announced that the remaining technical details of the roadster will be announced on September 19 and the premiere of the model in front of the audience will take place at the Paris Motor Show in early October. Sales of the new Z4 will start in the spring of 2019.