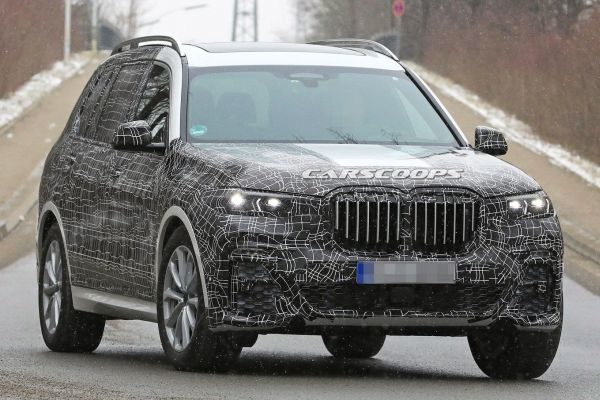 Do you remember the prototype BMW X7 iPerformance, which debuted at the Frankfurt Motor Show last year? He was the predecessor of the upcoming 7-seat flagship of the Bavarian manufacturer, which will compete with models such as Mercedes-Benz’s GLS. If you liked his controversial style, the good news is he will be officially unveiled later this year. Who, however, is waiting for him? Carscoops’ spy photos give us enough material to guess, almost how it would look like finished.

One of the most shocking aspects of the design concept was its huge radiator grille, reminiscent of … beaver. However controversial it sounds, it will be transferred to the production line and will undoubtedly cause irritation, which, in fact, is not that bad.

The X7 (code name G07) carries many other elements of the concept. They range from diagonal ventilation holes, chrome strips that run through the bottom of the doors, impressive front air intakes, thin laser headlights and sloping lid. Looking back, his look does not polarize so many opinions. The style resembles the current models of the brand. There are LED headlamps, a horizontal chrome stripe, a rear door with a window openable separately from the trunk, and two large tailpipes.

As the flagship SUV of the Bavarian company, X7 will be packed with all the technological features we’ve seen in 7-Series models and more. The spy photos of the interior of the prototype reveal BMW’s new all-digital panel. The official teasers released by the company earlier this month show that there will be a large central area to be used to display the navigation data. To the left of it are the fuel and spirometer indicator, and on the right – the tachometer and the temperature indicator.

The captured test car has the same three-spoke leather steering wheel, which is also fitted in the latest 5-Series and 7-Series sedans, as well as metal accents and a number of control buttons around the speed-selector that is re-designed. Like the other upcoming BMW models, the X7 will receive a new layout of the center console with a small digital screen controlled by air conditioning switches located between the ventilation holes.

The X7 will be if not the first, then one of the first models of the company to receive the new infotainment-entertainment system with the boring name of BMW Operating System 7.0. It promises to offer a clearer layout as well as more intuitive handling that will allow users more options to customize the ten menu pages. Bavarians say it will show the information you want when you need it. For example, it will switch to a parking card when you approach your destination. Users will be able to manage the system through the familiar iDrive controller, the touchscreen display, voice and gestures.

With the X7, the Bavarians want to offer something bigger than the X5 – a new SUV that comfortably accommodates 7 people. For comparison, the X7 iPerformance concept is about 5020 mm long, 2020 mm wide and 1800 mm high with a wheelbase of 3,010 mm, making it a bit shorter but wider than the Mercedes-Benz GLS.

The X7 will be built on the CLAR platform, features like ambience lighting, Bowers & Wilkins audio, night vision with object recognition, voice control and gestures, BMW display key (with which selected functions can be remotely controlled) and customizable driving modes. Experienced fun for the rear passengers will include 10-inch color displays, connectivity for mobile devices and game consoles, and more.

In addition to an “ordinary” seven-seater family SUV, BMW bosses have hinted at the creation of a more luxurious version with separate seats, increased space and four-seaters. This model will be targeted primarily at the US and China, with company representatives pointing out that its price will definitely be more than $ 100,000 but will not exceed 200,000 with the highest equipment.

According to last year’s specifications, BMW will add to the 6-cylinder engine and the 4,4-liter TwinPower Turbo V8, with a 455 hp output, mounted on the xDrive50i. This leaves room for the X7 xDrive M60i with the monstrous 600 horses and the 800 Nm V12 turbocharged engine from the M760Li to differentiate between