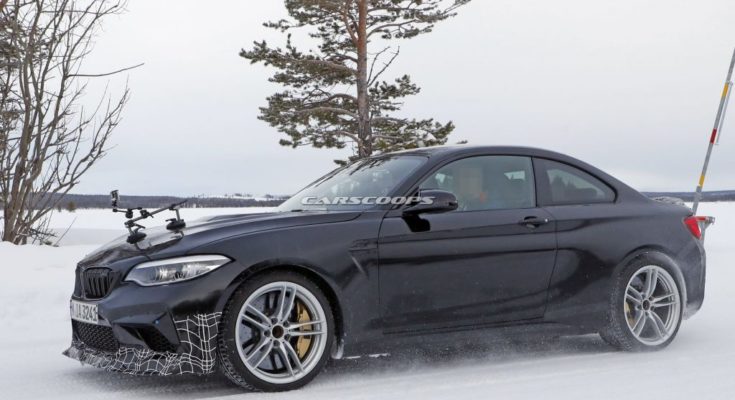 BMW M2 Competition may be coming soon, but the car manufacturer is already working on an even more extreme version of the little M-car. Recently shot in the northern parts of Sweden, the car is expected to be proudly named M2 CS or M2 CSL. The prototype caught in the cold looks almost ready for production, but some key details still remain hidden. The most remarkable ones are a front splitter and a small spoiler on the rear, still covered with black-white foil.

There are a number of other parts that distinguish M2 CS / CSL from the standard M2 Competition. For example, we can see larger ceramic brakes, carbon roof, aggressive rear diffuser, new bonnet, and 19-inch BMW M rims.

BMW still does not give any details about the upcoming M2, but we can still get a sense of the model thanks to the M3 CS and M4 CS already on the market. Now, we know that weight loss will be a major factor and a key feature of the CS version.

Regarding the engine, we know that BMW M2 Competition comes with the S55 twin turbo 6-cylinder engine from the M3 / M4. Its power is 405 hp and maximum torque is 550 Nm. It’s about 20 hp less than its older brothers. For the top-of-the-line version, BMW is expected to set the engine so that it captures the rest of the M-compartments.

Someone can think that 425 hp in M2 will destroy sales of M3 and M4, but the cars are drastically different in size and are targeted at different buyers. Moreover, the current 3-Series developed by M Division will not remain on sale for a very long time, which will allow the M2 CS to be the most sporty performance car focused on performance.