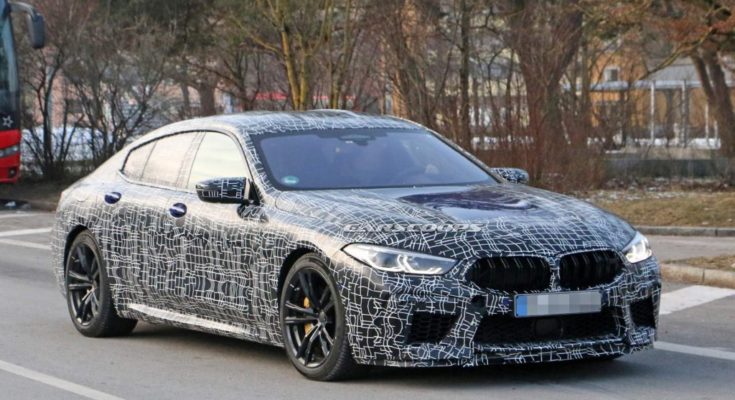 Less than a year after its debut in the conceptual form of the Geneva Motor Show in 2018, the BMW M8 Gran Coupe was spotted in tests. The good news is that the production model sticks as close as possible to the amazing concept from a design point of view. It has door handles and normal size side mirrors but has not lost much of its charm.

Bumps look like those of the Concept M8 Gran Coupe, although they seem to have been revised slightly. The vertical openings in the rear bumper have disappeared, as well as the vertical ones in the front bumper. Obviously, the holes in the mudguards also had to go, which is unfortunate.

In addition, BMW M8 Gran Coupe will be a powerful beast. Huge brakes hint for serious power, as well as the big wheels, which, by the way, do not look so big on the massive body.

Although there are still no pictures of the interior, it will be similar to those of BMW 8-Series. Of course, the cab will include M Division details, but the overall layout will remain unchanged.

The four-door BMW M8 Gran Coupe will use the same 4.4-liter twin-turbo V8 gasoline engine such as M8 Coupe and Convertible and the standard M xDrive AWD system with rear-wheel drive. BMW said the mechanism would have more than 591 hp, probably around 625 hp. The M5 Competition is doing so well, and this is in line with the M Division’s proposal that the M8 will be more powerful than the M5.

We know that the BMW M8 Coupe will also come in a competition version that has to offer even more power. We do not see why the M8 Gran Coupe did not get such a version. Expect the BMW M8 Gran Coupe to debut at the end of this year or early in 2020, following the M8 Coupe and the Convertible, which will come later this spring or summer.